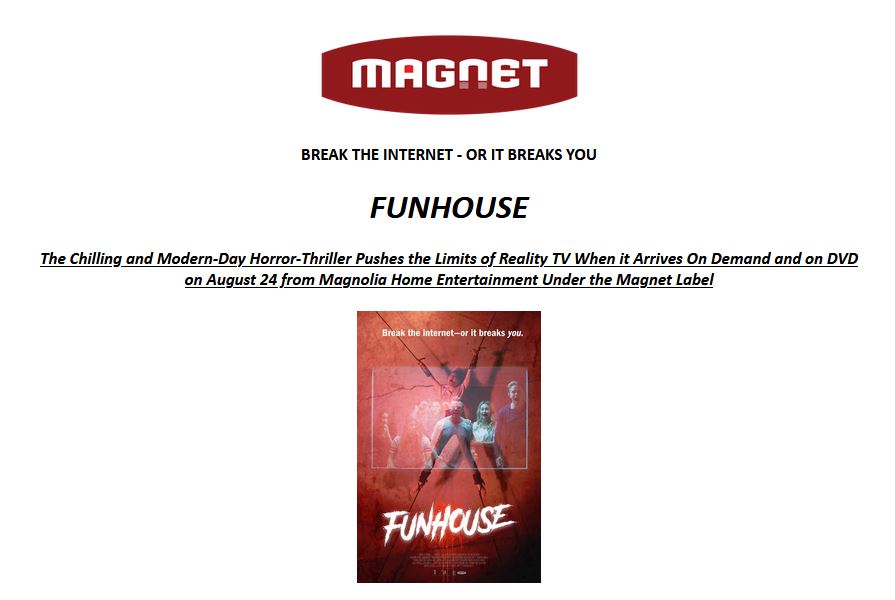 Synopsis
Down and out backup singer and celebrity ex-husband Kasper (Valter Skarsgård, “The Sandhamn Murders”) is invited to compete in the Funhouse, an online ‘Big Brother’ style reality show. In an attempt to rebrand his image due to a tarnished reputation, Kasper reluctantly accepts the offer. Alongside seven other C-list celebrities from around the globe, he will compete for a 5 million dollar prize. At first, the Funhouse is just as the name suggests, full of wild times, budding friendships, love connections, and brewing rivalries. But, to everyone’s surprise, the fun quickly turns into misery when the first challenge leaves one of the contestants brutally murdered.

From director Jason William Lee (The Evil in Us), the horror-thriller also stars Gigi Saul Guerrero (“Into the Dark”), Khamisa Wilsher (“The Hollow”), Christopher Gerard (“Arrow”), and newcomer Karolina Benefield.

Special Features
Behind the Scenes of Funhouse
Visual Effects Breakdown