We’re just under three months away from the release of the new Spider-Man movie, No Way Home, coming to cinemas on December 17 and over the last few months the rumor mill has been spinning up like crazy! People wondering what the story is going to be, when it will be set and more importantly, which characters from the Marvel Cinematic Universe (MCU) are going to be in it! We all have old and new favorites that we want to see, but how many of those names will be there? Well, this is what we’re here to talk about today, will the rumors about Tobey Maguire and Andrew Garfield being in the movie be true or are they just going to be rumors? Let’s get into it!

Before we begin it’s worth mentioning that if you’re enthralled with said rumor mill and if you fancy it there are plenty of outlets out there offering odds and taking bets on the potential appearances in Spider-Man: No Way Home, check out BetOnline if your looking to get in on the action, if you know your stuff and you’re an avid comic book fan, there’s likely money to be made here so feel free to share your knowledge and help me make a quick buck eh?!

We couldn’t do this article without talking about the two names we’ve previously mentioned. There has been a LOT of talk about the potential of seeing more iterations of Spider-Man, given its a movie that features a LOT of talk about the multiverse, especially after the events of Loki. It has been long speculated at this point, for months if not longer, that we MAY see older iterations of Spider-Man, not from the MCU. Tobey Maguire played Peter Parker in the Spider-Man trilogy starting in 2002 and finishing in 2007. While not my favorite Marvel movies they are pretty well loved among current fans, though I feel like it’s mostly for the meme factor at this point.

Then there was Andrew Garfield who of course played Peter Parker in “The Amazing Spider-Man” movies from 2012 and 2014. Funnily enough I actually enjoyed these movies less than the first trilogy. However I would be super hype if they both made an appearance, though it seems to have been quashed at this point, or at least hidden. I’m holding out hope that they do show up.

While we’re on the subject of “other iterations of spider-man” I would be SO hype if we could see Spider-Woman, AKA Gwen Stacey, firstly because more female main characters in the MCU is always a great thing as I think historically in superhero movies females have struggled for representation, but also, it just opens up WAY more doors and way more opportunities for series and movies moving forward. It’d be amazing if they brought Gwen Stacey in and then gave her a Disney+ series or something, animated or live action, either works.

Another rumor I have seen doing the rounds on the Internet is… DAREDEVIL. Following the release of the trailer many fans went into a frenzy after spotting what they were convinced were the hands of lawyer-turned-superhero Matt Murdock, set to represent Spider-Man as his lawyer, otherwise known as Daredevil. Could we possibly see Daredevil in Spider-Man: No Way Home? I LOVE Daredevil and bringing him into the MCU would be awesome for me. Could we have it as a throwback and have Ben Affleck appear? Or would they use Charlie Cox who appeared as Daredevil in the TV series that ran from 2015-2018. Either way I would be happy with an appearance! 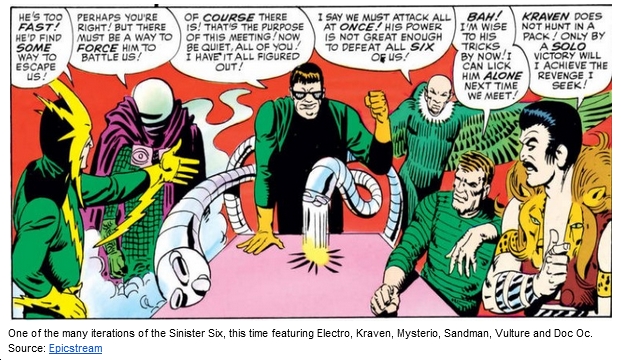 Next up, with the inclusion of so many historic villains like The Green Goblin, Doctor Octavius and somewhat more recent Electro, are there any other villains that we might’ve missed? Well, fans scraped every frame of the trailer released on August 24. Seems like they’re also bringing The Vulture back with Michael Keaton all but confirming it. He was caught out multiple times in interviews talking about how he doesn’t understand the whole multiverse thing, understandable, Michael. Next up rumored to be back is the lizard, this isn’t really a character they would have to cast either, they could bring back the lizard as an entirely CGI character, it’s a possibility. The last big one is the potential inclusion of Mysterio, but we saw him die didn’t we? OR DID WE? Mysterio and his team are all about visual effects and it’s entirely possible that he could also be in this movie. Some have even considered this could be the start of a sinister six series or, this being a sinister six movie in general, that could be interesting though!

What I know for sure is … We only have three months before all will be revealed. I am excited and I’m very hopeful that we can see all of the above and you know what? Why not more? Give me all the characters, give me as much as my eyes can physically absorb. Are you guys excited? If not … WHY NOT? This is going to be amazing and is going to blow the next phase of the MCU wide open and I’m ready. Lets get it!