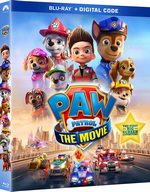 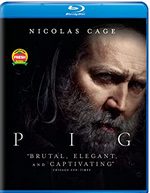 “Sex and the City: The Complete Series + 2 Movie Collection” includes all six seasons of the multiple Emmy award-winning series plus two feature films, released together on Blu-ray in one beautifully packaged set. Features all 96 episodes of the iconic series plus “Sex and

the City: The Movie” and “Sex and the City 2.” Stars Sarah Jessica Parker as Carrie Bradshaw, a New York-based writer who explores and experiences the unique world of Manhattan’s dating scene, chronicling the mating habits of single New Yorkers. The series also stars cast regulars Kim Cattrall as PR executive Samantha Jones, who’s seen — and done — it all; Kristin Davis as Charlotte York, still trying to hold on to the idea of happily ever after; and Cynthia Nixon as corporate lawyer and mother Miranda Hobbes, a pragmatist trying to balance the idea of love with the realities of life. From Warner … With his breakthrough film “La strada” (1954 — Italy), Federico Fellini launched both himself and his wife and collaborator Giulietta Masina to international stardom, breaking with 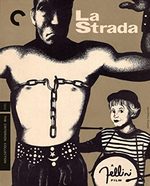 the neorealism of his early career in favor of a personal, poetic vision of life as a bittersweet carnival. The infinitely expressive Masina registers both childlike wonder and heartbreaking despair as Gelsomina, loyal companion to the traveling strongman Zampanò (Anthony Quinn, in a toweringly physical performance), whose callousness and brutality gradually wear down her gentle spirit. Winner of the very first Academy Award for Best Foreign-Language Film, “La strada” possesses the purity and timeless resonance of a fable and remains one of cinema’s most exquisitely moving visions of humanity struggling to survive in the face of life’s cruelties. On Blu-ray with a 4K digital restoration, undertaken in collaboration with The Film Foundation and the Cineteca di Bologna, with uncompressed monaural soundtrack. From The Criterion Collection.

“The Crown: The Complete Fourth Season” (2020) is a four-disc set with all 10 episodes. As the 1970s are drawing to a close, Queen Elizabeth and her family find themselves preoccupied with safeguarding the line of succession by securing an appropriate bride for Prince Charles, who is still unmarried at 30. As the nation begins to feel the impact of divisive policies introduced by Britain’s first female Prime Minister, Margaret Thatcher, tensions arise between her and the Queen which only grow worse as Thatcher leads the country into the Falklands War. While Charles’ romance with a young Lady Diana Spencer provides a much-needed fairy tale to unite the British people, behind closed doors, the Royal Family is becoming increasingly divided. Stars Olivia Colman, Tobias Menzies, Helena Bonham Carter, Gillian Anderson and Josh O’Connor. On DVD, Blu-ray, from Sony … “Jack Irish, Season 3” (2021) is a two-disc set with four episodes. Emmy Award-winner Guy Pearce reprises his iconic role as Jack Irish, former criminal lawyer, and part-time debt collector, with a penchant for getting wrapped up in things he shouldn’t. The long-suppressed trauma of Isabel Irish’s brutal and random murder by Jack’s former client Wayne Milovich – which launched the first Jack Irish instalment – rears its ugly head when Jack discovers there was more to those fateful events all those years ago. Namely, a criminal conspiracy involving his trusted friend, homicide detective Barry Tregear. On DVD, Blu-ray, from Acorn Media … “Kung Fu: The Complete First Season” (2021) is a three-disc set with all 13 episodes. Olivia Liang stars as Nicky Shen in the reimagined version of the legendary 1970s series. A quarter-life crisis causes young Chinese-American woman Nicky Shen to drop out of college and journey to an isolated monastery in China. But when she returns to San Francisco, she finds her hometown is overrun with crime and corruption and her parents are at the mercy of a powerful Triad. Nicky rights wrongs while searching for the assassin who killed her Shaolin mentor. On DVD, Blu-ray, from Warner … “Mom: The Eighth and Final Season” (2020-21) includes all 18 episodes. Allison Janney stars in this heart-wrenching comedy. Bonnie Plunkett (Janney) must learn to adjust without her daughter and former-roommate, Christy, around. With a chaotic past behind her and a newly empty nest, she focuses on her marriage to her husband, Adam (William Fichtner) and on what she wants to be now that she’s finally grown up. From Warner … “Neon Genesis Evangelion” (1995) is a five-disc set that includes the original 26 episode television series, “Neon Genesis Evangelion,” as well as the films “Evangelion:Death (True)2” and “The End Of Evangelion.” Contains over five hours of bonus features, including animatics, TV commercials, music videos, and more. In 2015, Tokyo-3 is under attack from “Angels,” extraordinary beings that possess various special abilities. Multipurpose Humanoid Decisive Weapon, Evangelion is the only method to counter these Angels, and Shinji Ikari is chosen as its pilot. The battle for the fate of humankind has begun. On Blu-ray from GKIDS/Shout! Factory … “Star Trek: Discovery: Seasons 1-3” (2017-21) includes all 42 episodes. Ten years before Kirk, Spock, and the Enterprise, the USS Discovery discovers new worlds and lifeforms as one Starfleet officer learns to understand all things alien. The series features a new ship and new characters, while embracing the same ideology and hope for the future that inspired a generation of dreamers and doers. On DVD, Blu-ray, from CBS/Paramount.

In “Nine Days” (2020), starring Winston Duke, Zazie Beetz, Benedict Wong, Zazie Beetz, Tony Hale, Bill Skarsgård, David Rysdahl and Arianna Ortiz, a man interviews five unborn souls to determine which one can be given life on Earth. Will (Duke) and Kyo (Wong) spend their days in a remote outpost watching the live Point of View (POV) on TV’s of people going about their lives, until one subject 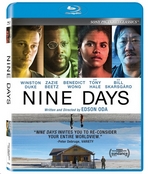 perishes, leaving a vacancy for a new life on earth. Soon, several candidates — unborn souls — including Emma (Beetz) and Kane (Skarsgård) arrive at Will’s to undergo tests determining their fitness, facing oblivion when they are deemed unsuitable. But Will soon faces his own existential challenge in the form of free-spirited Emma, a candidate who is not like the others, forcing him to turn within and reckon with his own tumultuous past. Fueled by unexpected power, he discovers a bold new path forward in his own life. Making his feature-film debut after a series of highly acclaimed and award-winning short films and music videos, Japanese Brazilian director Edson Oda delivers a heartfelt and meditative vision of human souls in limbo, aching to be born against unimaginable odds, yet hindered by forces beyond their will. On DVD, Blu-ray, from Sony. Read more here … In “The Spore” (2021), starring Jeanie Jefferies, Haley Heslip, Peter Tell and Brian Hillard, the lives of 10 strangers intersect through a terrifying chain of events as a mutating fungus begins to spread through a small town wiping out everyone that comes into contact with it. From Lionsgate. Read more here … 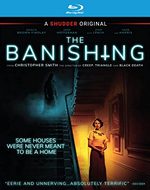 “The Banishing” (2021), starring Jessica Brown Findlay, John Hefferman, Adam Hugill, John Lynch and Sean Harris, is the true story of the most haunted house in England. A young reverend, his wife and daughter move into a manor with a horrifying secret. When a vengeful spirit haunts the little girl and threatens to tear the family apart, the reverend and his wife are forced to confront their beliefs. They must turn to black magic by seeking the help of a famous occultist … or risk losing their daughter. On DVD, Blu-ray, from RLJE Films … In “Iron Temple” (2021), starring Tony Torres, Woody Deant, Jamil Malik, Ruben E. A. Brown and Aaron M. Abelt, International Federation of Bodybuilding and Fitness Pro Tony Torres built a lucrative lifestyle which came crashing down after covering for a friend who committed a murder. After being chased by the FBI he was sent to prison for five years. Once he did his time, Tony had to build back his life. From Freestyle Digital Media. Read more here … “Zone 414” 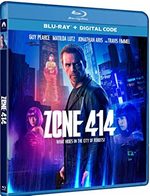 (2021), starring Guy Pearce, Matilda Lutz, Jonathan Aris and Travis Fimmel, is a sci-fi thriller set in Zone 414, a dangerous, dark colony of humanoids known as “the city of robots.” The colony’s creator (Fimmel) hires private investigator David Carmichael (Pearce) to track down his missing daughter. David teams up with Jane (Lutz), a highly advanced A.I. equipped with the same technology of her fellow humanoids, but with all the emotions, feelings and dreams of a human being. They travel through the city uncovering clues and a crime that calls into question the origins and true purpose behind the city of artificial humans. On DVD, Blu-ray, from Paramount.

In “Chernobyl 1986” (2021 — Russia), after the explosion at the Chernobyl nuclear power plant number 4, the USSR and all of Europe is faced with an even greater threat – a possible steam explosion that would eject even more radioactive material into the atmosphere over the entire continent. Firefighter Alexey volunteers for what seems like a suicide mission: manually drain the plant’s reservoir before the melting reactor collapses into it. 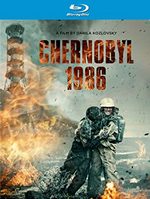 Risking their lives in service to their country, Alexey and his colleagues must navigate the labyrinthine passages of the plant’s underground, facing danger at every turn from the facility’s quickly failing infrastructure. With time running out, and the fate of all of Europe hanging in the balance, this team of ordinary citizens turned heroes must use all their strength and bravery to save their nation from complete devastation. Stars Danila Kozlovskiy, Oksana Akinshina and Filipp Avdeev. On DVD, Blu-ray, from MPI Media Group. Read more here … During the post-WW2 Indonesian War of Independence, a young Dutch soldier joins an elite unit led by a mysterious captain known only as “The Turk” in “The East” (2020 — The Netherlands), starring Martijn Lakemeier, Marwan Kenzari and Jonas Smulders. When the fighting intensifies, the young soldier finds himself questioning – and ultimately challenging – his commander’s brutal strategy to stop the resistance. On DVD, Blu-ray, from Magnolia Home Entertainment/Magnet … In “Who You Think I Am” (2021 — France), starring Juliette Binoche, Francois Civil, Nicole Garda, Guillaume Gouix and Charles Berling, Academy Award-winner Binoche balances cunning and vulnerability in this romantic cyber-drama turned psychological thriller. Ghosted by her hunky twentysomething lover, Claire (Binoche), a middle-aged professor and single mom, creates a fake Facebook profile to do a little undetected online snooping. But when her 24-year-old avatar “Clara” is friended by her ex’s equally attractive roommate (Civil), superficial correspondence quickly escalates towards intense intimacy and uncontrollable obsession. Adapted from Camille Laurens’ best-selling novel. On Blu-ray from Cohen Media Group.

Branching off of his bestselling book, renowned forester and writer Peter Wohlleben guides viewers through his most precious ideas and understanding of how trees work in the enlightening documentary “The Hidden Life of Trees” (2020 — Germany). Presenting ecological, biological and academic expertise with matter of fact candor, Wohlleben inspires us to really see the forest for the trees. Traveling through Germany, Poland, Sweden and Vancouver, her discusses, debates and explains the amazing process of life, death and regeneration he has observed in the woodland, and the amazing scientific mechanisms behind these wonders of which we are too often blissfully unaware. On DVD, Blu-ray, from MPI Media Group.