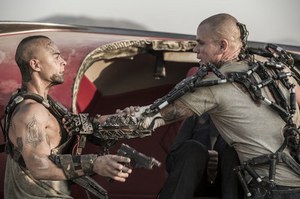 “Elysium” is director Neill Blomkamp’s follow-up to his innovative sci-fi morality tale “District 9” and, not surprisingly, he here covers some of the same ground — the exploitation of “outsiders” by the priviledged elite. But instead of the outsiders being aliens, here they’re the entire population of the Earth, who toil on an overpopulated, ruined planet in the year 2154 for the benefit of the very wealthy, who live on a pristine man-made space station called Elysium. Crime, poverty and diseease are the order of the day on Earth; above, on Elysium, it’s all sweetness and light and state-of-the-art medical care that can cure any disease or bodily injury. When factory worker Max (Matt Damon) is exposed to a fatal dose of radiation, his only chance for survival is to illegally travel to Elysium for medical treatments, and to do so he has to reluctantly take on a dangerous mission — one that pits him against Elysium’s nasty, dictator-in-the-making Secretary Delacourt (Jodie Foster) and her hard-line forces. “Elysium” outstripse “District 9” with its onslaught of spectacular special effects and brutal, bloody violence, but falls short in its story line — a pretty traditional “us vs. them” scenario — and its weak characterizations. Still, it’s a pure fun ouitng that gets it’s intelligent message about “illegal immigration” across with zest. Extras: “Collaboration: Crafting the Performances in Elysium” behind-the-scenes cast featurette; “Engineering Utopia: Creating a Society in the Sky” featurette on designing and creating the utopian space station. Blu-ray adds an extended scene; “Visions of 2154,” an interactive exploration of the art and design of Elysium; “The Journey to Elysium,” a three-part documentary with “Envisioning Elysium,” a pre-production diary, “Capturing Elysium” location featurette, and “Enhancing Elysium,” a post-production diary that explores the editing process; “In Support of Story: The Visual Effects of Elysium,” an in-depth look at the process of shooting visual effects scenes and incorporating CGI environments and vehicles into those scenes in post-production; “The Technology of 2154,” a featurette that offers insights into the film’s depiction of the technology of Elysium, from independently functioning Droids to next-generation military tech that gives humans machine-enhanced power. Vitals: Director: Neill Blomkamp. Stars: Matt Damon, Jodie Foster, Sharlto Copley, William Fichtner, Michael Shanks, Alice Braga, Talisa Soto, Diego Luna, Carly Pope. 2013, CC, MPAA rating: R, 109 min., Science Fiction Action, Box office gross: $90.790 million, Sony.