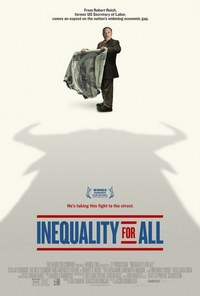 A passionate argument on behalf of the middle class, “Inequality for All” features Robert Reich — professor, best-selling author, and Clinton cabinet member — as he demonstrates how the widening income gap has had a devastating impact on the American economy. Here’s some startling facts: In 1983 the poorest 47 percent of America had $15,000 per family, 2.5 percent of the nation’s wealth. In 2009 the poorest 47 percent of America owned ZERO PERCENT of the nation’s wealth (their debt exceeded their assets). At the other extreme, the 400 wealthiest Americans own as much wealth as 80 million families — 62 percent of America. The reason is the stock market. Since 1980, the American GDP has approximately doubled. Inflation-adjusted wages have gone down. But the stock market has increased by over 10 times, and the richest quintile of Americans owns 93 percent of it.

When middle class consumers have to tighten their belts, the whole economy suffers — as seen in the years before the Great Depression and today: So much of the nation’s income and wealth are going to the top, that the vast middle class doesn’t have the purchasing power to keep the economy going. The middle class represents 70 percent of spending and is the great stabilizer of our economy. No increase in spending by the rich can make up for it — as the income gap increases, the country actually gets poorer because we can’t fund the necessary improvements in the infrastructure. This is the moment in history in which we find ourselves: unprecedented income divisions, a wildly fluctuating and unstable economy, and average Americans increasingly frustrated and disillusioned. The film alternates between intimate, approachable sequences and intellectually rigorous arguments helping people with no economic background to understand what it means for the U.S. to be economically imbalanced. The films posits six fixes: Raise the minimum wage, strengthen workers’ voices, invest in education, reform Wall Street, fix the tax system and get big money out of politics. Reich presents a passionate argument with cutting humor and armed with staggering facts that poignantly explain economic inequality. Learn more about the film here. Extras: Deleted scenes, behind-the-scenes interviews with the filmmakers. Vitals: Director: Jacob Kornbluth. 2013, CC, MPAA rating: PG, 90 min., Documentary, Box office gross: $1.181 million, RADiUS-TWC/Anchor Bay.