A blood-splattered, timewarped animated family drama. After emerging as the sole survivor in a deadly revenge game set up by her father to punish his children, Miriam receives an offer from a supernatural entity to go back in time and try again. Now, Miriam must survive both her father’s blood lust and the Gamemaster’s ever-changing rules to save her siblings as 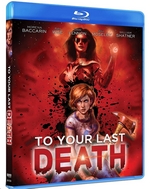 she relives the worst night of her life.

Extras: Each Blu-ray purchase will come with a redemption code to over four hours of digital extras, including: an audio commentary with director Jason Axinn; a Zoom panel with Axinn, star Dani Lennon and others; an interview with star William Shatner; interviews and behind-the-scenes with stars Morena Baccarin, Ray Wise, Bill Moseley, Dani Lennon and Florence Hartigan; a behind-the-scenes reel; comic con panels; an animation demo with lead animator Mohammad Ali Sharifpour; unused artwork and animation; crowdfunding highlights; featurettes on the development of the film.