A sequel and epilogue to the television series “Breaking Bad,” which followed chemistry teacher Walter White (Bryan Cranston) partnering with a former student Jesse Pinkman (Aaron Paul) to become kingpins in the production of 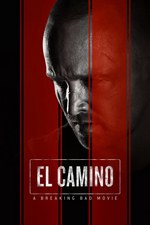 crystal meth in Albuquerque, New Mexico. Jesse must come to terms with his past in order to forge some kind of future. This thriller was written and directed by Vince Gilligan, the creator of “Breaking Bad.”