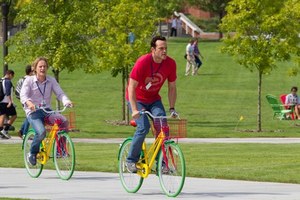 Some movies are an embarrassment of riches. Some movies are just an embarrassment. This one falls under the latter category. This comedy — about a pair of old-fashioned, outmoded salesmen (Vince Vaughn and Owen Wilson) who talk their way into an internship program at the state-of-the-art Google campus, where they must compete against tech-savvy college students for a handful of jobs — is about as much fun as waiting for a long Windows 8 update to download and install itself. The only saving grace here is the spark between Vaughn and Wilson that was kindled during 2005’s “Wedding Crashers.” Extras: “Any Given Monday” featurette, commentary with Shawn Levy. Blu-ray adds deleted scenes. Vitals: Director: Shawn Levy. Stars: Vince Vaughn, Owen Wilson, Rose Byrne, Max Minghella, Aasif Mandvi, JoAnna Garcia, Jessica Szohr, John Goodman, B.J. Novak. 2013, CC, MPAA rating: PG-13, 130 min., Comedy, Box office gross: $44.422 million, Fox.