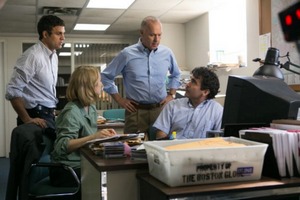 Upholding the grand cinema tradition of films about hard-working journalists who expose corruption and malfeasance (“All the President’s Men” comes to mind immediately) is director Tom McCarthy’s “Spotlight,” a superbly directed and acted dramatization of the Boston Globe’s Pulitzer Prize-winning “Spotlight” team investigation into allegations of child sex abuse within the local Catholic Archdiocese — child abuse that had been going on for decades and that had been covered up by the Church as well as Boston’s legal and government establishment. Like McCarthy’s previous outings, “The Station Agent,” “The Visitor” and “Win Win,” “Spotlight” eschews splash and hyperbole to concentrate on the minute details of the story — here following the investigative reporters as they go after the facts, digging into archives and conducting interview after interview — and slowly building up layer after layer of nuance and mis en scene. The film — which stars Mark Ruffalo, Michael Keaton, Rachel McAdams, Liev Schreiber, Billy Crudup, Stanley Tucci, John Slattery, Lana Antonova, Jamey Sheridan and Brian d’Arcy James — has been nominated for six Oscars, including Best Motion Picture of the Year, Best Performance by an Actor in a Supporting Role for Mark Ruffalo, Best Performance by an Actress in a Supporting Role for Rachel McAdams, Best Achievement in Directing for Tom McCarthy, Best Writing, Screenplay Written Directly for the Screen and Best Achievement in Editing. It already has nabbed Outstanding Performance by a Cast in a Motion Picture from SAG, Best Picture at the Broadcast Film Critics Association Awards, won Best Picture and Best Screenplay at both the Los Angeles Film Critics Association Awards and the National Society of Film Critics Awards, and Best Original Screenplay from the Writers Guild. Given that Alejandro González Iñárritu and his “Birdman” won for best director and best film last year, effectively knocking out his “The Revenant,” which is clearly the best film this year, and given that “Carol,” our second pick for Best Motion Picture of the Year, wasn’t nominated by the Academy, we figure that McCarthy and “Spotlight” will be the winners this year. Vitals: Director: Tom McCarthy. Stars: Mark Ruffalo, Michael Keaton, Rachel McAdams, Liev Schreiber, Billy Crudup, Stanley Tucci, John Slattery, Lana Antonova, Jamey Sheridan, Brian d’Arcy James. 2015, CC, MPAA rating: R, 128 min., Drama, Box office gross: $31.045 million, Universal. Extras: “Uncovering the Truth: A Spotlight Team Roundtable,” “Spotlight: A Look Inside,” “The State of Journalism.”