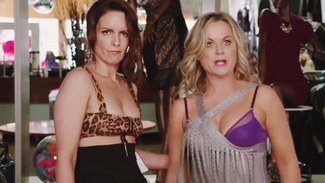 When it comes to clicking together in comedy routines, it’s undeniable that Tina Fey and Amy Poehler can make magic — but not in this film. The pair play the Ellis sisters, the seemingly-responsible Maura (Poehler) and the impossibly hotheaded Kate (Fey), who return home to clean out the old junk in their bedroom after their retired parents put the family home on the market. As they rummage through the memories of their teen years, they hatch a crazy plan: one final “Ellis Island” blowout for their ex-classmates, a party to end all parties. Unfortunately, by the time we get to the “rager,” we’re so bogged down by the lame dialogue, bathroom humor, nasty sexual jokes and filthy words, that what’s supposed to be an insane blow-out becomes a mundane yawner. Fey and Poehler can do better. Includes an unrated version not seen in movie theaters. Vitals: Director: Jason Moore. Stars: Tina Fey, Amy Poehler, Maya Rudolph, Ike Barinholtz, John Leguizamo, John Cena, James Brolin, Dianne Wiest, Rachel Dratch, Samantha Bee, Kate McKinnon. 2015, CC, MPAA rating: R, 118 min., Comedy, Box office gross: $86.160 million, Universal. Extras: Deleted scenes, extended scenes, gag reel, “The Improvorama,” commentary with director Jason Moore, star-producer Tina Fey, star-executive producer Amy Poehler and writer Paula Pell. Blu-ray adds “How to Throw a Party,” “Grown-Up Parties Suck,” “The Alex Chronicles,” “The Kate and Pazuzu Chronicles,” “A Teen Movie … for Adults,” “The Original Sister,” “Pool Collapse” visual effects.