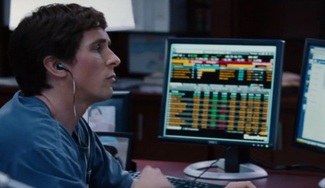 It’s been seven years since the housing market bubble burst and the world was pushed into a major economic recession. How did it happen? Greedy and corrupt Wall Street investors and bankers — taking advantage of lowered federal regulations — made subprime housing loans to people who couldn’t afford them, then packaged the loans as investment vehicles for other bankers and investment firms. In 2008, Wall Street guru Michael Burry (Christian Bale) realized that a number of subprime home loans were in danger of defaulting, and he bet against the housing market by throwing more than $1 billion of his investors’ money into credit default swaps. His actions attracted the attention of banker Jared Vennett (Ryan Gosling), hedge-fund specialist Mark Baum (Steve Carell) and other opportunists. Together, they made a fortune by taking full advantage of the impending economic collapse. Director Adam McKay’s satirical and enlightening look at the machinations of big money is based on the best-selling book by Michael Lewis. The film won an Oscar for Best Adapted Screenplay. Vitals: Director: Adam McKay. Stars: Christian Bale, Steve Carell, Ryan Gosling, Brad Pitt, Marisa Tomei, Melissa Leo, Selena Gomez, Hamish Linklater, Rafe Spall. 2015, CC, MPAA rating: R, 130 min., Bio-Drama, Box office gross: $66.462 million, Paramount. Blu-ray extras: “In the Trenches: Casting,” “The Big Leap: Adam McKay,” “Unlikely Heroes: The Characters of The Big Short,” “The House of Cards: The Rise of the Fall,” “Getting Real: Recreating an Era,” deleted scenes.