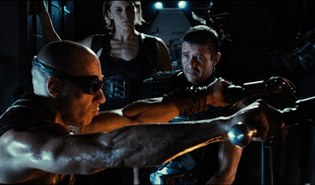 The latest chapter of the saga that began with 2000’s hit sci-fi film “Pitch Black” and 2004’s “The Chronicles of Riddick” reunites writer-director David Twohy and star Vin Diesel. The infamous antihero Riddick, a dangerous, escaped convict wanted by every bounty hunter in the known galaxy, has been left for dead on a sun-scorched planet that appears to be lifeless. Soon, however, he finds himself fighting for survival against alien predators more lethal than any human he’s encountered. The only way off is for Riddick to activate an emergency beacon and alert mercenaries who rapidly descend to the planet in search of their bounty. The first ship to arrive carries a new breed of merc, more lethal and violent, while the second is captained by a man whose pursuit of Riddick is more personal. With time running out and a storm on the horizon that no one could survive, his hunters won’t leave the planet without Riddick’s head as their trophy. Extras: “Vin’s Riddick”­ behind-the-scenes featurette, “Meet the Mercs” supporting cast featurette, ­”Riddick: Blindsided,” ­a motion comic prequel to Riddick that fills in the gap since 2004’s “The Chronicles of Riddick.” Blu-ray adds “The Twohy Touch” behind-the-scenes featurette with the director, “Riddickian Tech” effects featurette, “The World Of Riddick” featurette. Vitals: Director: David Twohy. Stars: Vin Diesel, Jordi Molla, Matt Nable, Katee Sackoff, Karl Urban, Dave Bautista, Bokeem Woodbine, Matt Nable, Raoul Trujillo, Nolan Gerard Funk. 2013, CC, MPAA rating: R, 119 min., Science Fiction, Box office gross: $41.997 million, Universal.