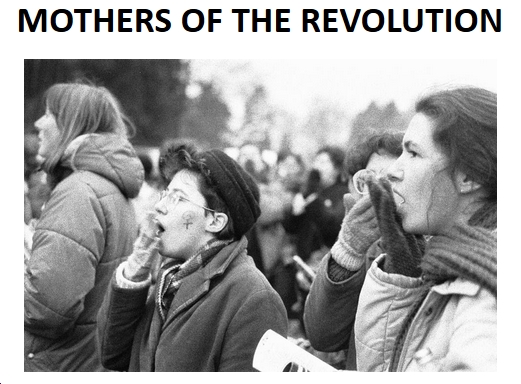 On September 5th, 1981 a group of women came together to change the world. These women marched from Wales to Berkshire to protest over nuclear weapons being kept at RAF Greenham Common. The Greenham Common Women’s Peace Camp that followed, challenged world leaders, altering the course of history and went on to inspire millions as the world’s first and biggest female-only demonstration, preceded only by the suffragettes.

MOTHERS OF THE REVOLUTION, a feature-length documentary that tells the story of the extraordinary women behind the Greenham Common Peace Camp, heads to the USA this Fall.

Narrated by Glenda Jackson and featuring interviews with key participants including Julie Christie and Rebecca Johnson, alongside archive footage from the Greenham Common Women’s Peace Camp, Mothers of the Revolution takes you through one of the longest protests in history, when between 1981 and 2000, thousands of women from around the world came together at Greenham Common to take a committed stand against nuclear proliferation.

Forty years ago, these everyday human beings began with that first step on their march to Greenham Common and became the heroes of a movement that changed the world.

Directed by Briar March (Coffin Club, There Once Was An Island) and produced by prolific filmmaker Matthew Metcalfe (The Dead Lands, McLaren) and Leela Menon (Born Racer, Wayne).

Julie Christie – An Academy award-winning British actress and icon of the “Swinging Sixties”, Julie Christie was a woman of Greenham Common, joining them for “Embrace the Base” and, later, going with an all-women delegation to Washington to take the peace movement’s message to the US.
Rose McGowan – An actress and activist named one of TIME’s Silence Breakers, Rose McGowan appears in MOTHERS OF THE REVOLUTION.
Glenda Jackson (narrator) – An Academy-award winning actress and Labour MP for 23 years, during Glenda’s political career she was known for her energetic commitment to a number of causes – most notably social exclusion and transport. Since returning to acting in 2015, Glenda has gone on to win a Tony, a BAFTA and an International Emmy.
Briar March (director) – A documentarian and Fulbright scholar, her latest film, MOTHERS OF THE REVOLUTION honors the Greenham Common Women.
Lucy Lawless – New Zealand icon Lucy Lawless, most known for her role as “Xena the Warrior Princess”, appears is MOTHERS OF THE REVOLUTION.
Rebecca Johnson – Greenham peace women and Noble Peace Prize Winner, Rebecca lived at the camp for 6+ years during which she was involved in all of the major actions and was often in media. In particular, Rebecca climbed the air traffic control tower and broke into the main operating room. After the INF treaty was signed, she attended a Pugwash conference where she witnessed Gorbechev give credit to the women at Greenham Common and their direct influence on him during his negotiations with Reagan. After Greenham, Rebecca went on to receive a Noble Peace Prize for her work with ICAN (International Campaign to Abolish Nuclear Weapons) establishing an international ban to rid Nuclear Weapons for good. Since Greenham, her fight against nuclear weapons has continued.
Chris Drake – After her first visit to Greenham her life was changed forever, never before had she felt more connected with her true self. Chris provides a deeply personal perspective of motherhood, identity, LGBTQ issues, imprisonment and feminism in the 80s, showing the personal sacrifices one mother makes for her children, but at a cost.

Karmen Thomas – Involved in the conception of original March/ makes a trip to Russia to meet with the Moscow Group for Trust and bravely challenges Soviet authorities. Returns to Russia a second time with a group of 30 women from Greenham. Visits Greenham regularly for all major actions. Karmen is the influencer, always thinking of the next move (be it starting a march with Ann Pettitt, or going to Russia to meet the peace women’s counterparts).
Olga Medvedkov – Russian Trust Member who attends a meeting with Karmen, Ann, and Jean at the Official Peace Committee.
Posted by OnVideo on October 17, 2021  Add comments