Milestone Film and Video has just announced two additions to its very important “Project Shirley,” the company’s five-year mission to restore and release the works of the brilliant dancer, bride, runaway wife, radical filmmaker, documentary and indie film pioneer Shirley Clarke (1919-1997). On hand here are magnificent restoration of “Portrait of Jason” (1967) and “Ornette: Made in America!” (1986), both loveingly restored by Milestone, the Academy Film Archive and the UCLA Film & Television Archive. 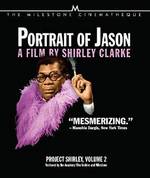 The “star” of “Portrait of Jason (Project Shirley Volume 2)” is black, gay, hilarious, heartbreaking and on screen for every one of the film’s 107 minutes. On the evening of December 3, 1966, director Shirley Clarke and crew filmed Jason for 12 straight hours as he told stories about his life, loves and work. At a time when it was illegal to be gay in the U.S., Jason spun extraordinary tales about his career as a nightclub entertainer; his confrontations with his father; growing up in Trenton; and the many forms of hustling that comprised the basis of his existence. Jason may be the most self-revealing Scheherazade in the history of documentary films. Or is he? How much of what Jason says is true and how much is a fabulous performance? Even Clarke’s filmmaking prevaricates — “Portrait of Jason” was designed and painstakingly put together to look rough and entirely unedited. While all her films explored that porous border between cinema verite and fiction — “Portrait of Jason,” with its many ambiguities and contradictions, may well be Clarke’s masterpiece. Milestone searched for three years to find the original elements for this definitive restoration of a landmark film. Provocative, groundbreaking and truly gripping, it was one of the first LGBT films to be taken seriously by the general audiences. 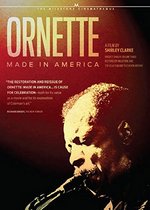 “Ornette: Made in America! (Project Shirley Volume Four)” captures jazz master Ornette Coleman’s evolution over three decades, chronicling his boyhood in segregated Texas and his subsequent emergence as an American cultural pioneer and world-class icon. The film explores the rhythms, images and myths of America seen through the eyes of an artist’s ever-expanding imagination and experience. Clarke followed Ornette and his young son Denardo starting in the late 1960s and ending with a homecoming tribute in his hometown of Fort Worth in 1983 that featured a gala concert of his seminal jazz symphony “Skies of America” alongside performances with his Prime Time band.

Both titles will be available November 11 on DVD and Blu-ray Disc.