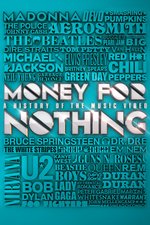 Money For Nothing: A History of the Music Video (2013) A rip-roaring look at the past, present and future of the music video, a refresher course on the last 60 years of popular music and the unforgettable images that accompanied them. While the music video became a staple of entertainment with the birth of MTV in 1981, the art form existed for many years before that, from musical shorts shown between features in movie theaters, to “event” pieces created by the Beatles and others to unveil and promote their new songs. But with the rise of MTV, what was originally considered an ad for a product became the product itself, with artists like Madonna, the Police, Michael Jackson, Dire Straits, David Bowie, R.E.M. and many others creating elaborate little films that not only accompanied their music, but were a parallel creative expression. If the music video was still ultimately a commercial, it was an ad campaign so brilliant, slick and subtle that it occasionally made its consumers forget what they were being sold. Based on the book of the same title by Saul Austerlitz. Formats: DVD, Digital. (Virgil Films).