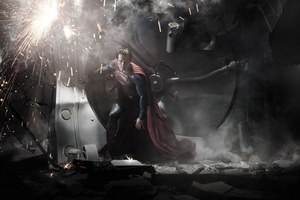 Rebooting of the Superman franchise, with Henry Cavill as the Man of Steel, Amy Adams as Lois Lane, Laurence Fishburne as Perry White, Diane Lane and Kevin Costner as the Kents, Russell Crowe as Jor-El and Michael Shannon as the evil General Zod from Krypton, who comes to Earth to wreak revenge on Kal-El (Superman). It’s an exciting retelling of the Superman origins. The official synopsis: A young boy learns that he has extraordinary powers and is not of this Earth. As a young man, he journeys to discover where he came from and what he was sent here to do. But the hero in him must emerge if he is to save the world from annihilation and become the symbol of hope for all mankind. Extras: “Strong Characters, Legendary Roles” featurette explores the legendary characters of the Superman mythology and how they have evolved in this new iteration of the Superman story; “All-Out Action” goes inside the intense training regimen that sculpted Henry Cavill into the Man of Steel and Michael Shannon and Antje Traue into his Kyptonian nemeses; “Krypton Decoded” lowdown on all the amazing Krypton tech, weapons and spaceships. Blu-ray adds “Journey of Discovery: Creating Man of Steel” immersive feature-length experience that allows viewers to watch the movie with director Zack Snyder and stars Henry Cavill, Amy Adams, Diane Lane and others as they share the incredible journey to re-imagine Superman; “Planet Krypton” exploration of Krypton and its lost society. Vitals: Director: Zack Snyder. Stars: Henry Cavill, Amy Adams, Michael Shannon, Diane Lane, Kevin Costner, Russell Crowe, Julia Ormond, Antje Traue, Harry Lennix, Christopher Meloni, Laurence Fishburne. 2013, CC, MPAA rating: PG-13, 143 min., Action-Adventure, Box office gross: $113.080 million, Warner.