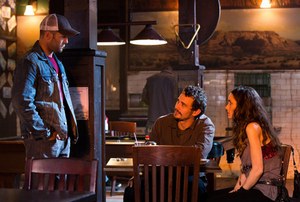 If you don’t expect much from this good-guy-against-the-bad-guys action-thriller, then you won’t be disappointed. It’s old-fashioned American movie-making along the lines of “Bad Day at Black Rock” or “High Noon” in which a lone hero stands up against a bevy of criminals and crazies. Jason Statham plays an ex-DEA agent who breaks up a meth-peddling biker gang and then retires to a quiet Southern town with his 10-year-old daughter. Unfortunately, he discovers that the town is riddled with corruption, drugs and violence, and not only does he have to contend with a psychotic local drug lord (James Franco), he has to fend off the bikers when his witness-protection cover is blown. Statham plays his regular invincible hero while Franco creates a quirky villain (ala “Spring Breakers”) and it’s all pretty predictable as the face-off situations build up to the crescendo violence of the ending. Still, a fun outing. Directed by Gary Fleder (“Runaway Jury,” “Impostor,” “Kiss the Girls”) with a screenplay by Sylvester Stallone. Extras: Deleted scenes, alternate ending, “Standoff” featurette. Vitals: Director: Gary Fleder. Stars: Jason Statham, James Franco, Winona Ryder, Kate Bosworth, Rachelle Lefevre, Frank Grillo. 2013, CC, MPAA rating: R, 100 min., Action, Box office gross: $18.438 million, Universal.