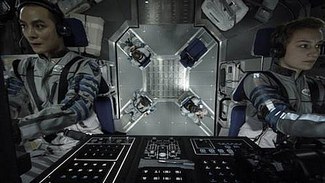 “Europa Report” is one of the new breed of thrillers (using any combination of “documentary” story-telling, video camera footage, talking heads and real-time action) that has brought us “The Blair Witch Project,” the “Paranormal Activity” outings, “Cloverfield,” “Apollo 18” and “Troll Hunter.” Though this science fiction actioner puts a lot of emphasis on science fact, it never shortchanges the fiction, stylishly delivering its thrills and chills, much like Danny Boyle’s highly underrated “Sunshine,” to which “Europa Report” has a striking kinship. When unmanned probes suggest that a hidden ocean could exist underneath Europa, one of Jupiter’s moons, Europa Ventures, a privately funded space exploration company, sends six of the best astronauts from around the world to confirm the data and explore the revolutionary possibility that life may exist there. It’s a doomed mission, and we’re given privy to the failures of the venture: the loss of communications, equipment breakdowns, the tragic death of a crew member, the psychological and physical toll of deep space travel and, after arriving on Europa, a discovery more frightening than the crew could ever have imagined. It’s well-acted, directed, and the CGI is incredible — with utmost detail to scientific realities. Sci-fi fans need to put this on their short list. Extras: “Exploring the Visual Effects of Europa Report,” “The Musical Journey of Europa Report,” behind-the-scenes photo gallery, theatrical trailer. Vitals: Director: Sebastian Cordero. Stars: Christian Camargo, Embeth Davidtz, Anamaria Marinca, Michael Nyqvist, Daniel Wu, Karolina Wydra, Sharlto Copley. 2013, CC, MPAA rating: PG-13, 90 min., Science Fiction, Box office gross: $.123 million, Magnolia Home Entertainment.