The Visually Stunning Animated Film Featuring the Voices of Lake Bell, Michael Cera, Zoe Kazan and More Arrives On Blu-Ray™ and On Demand on November 16 from Magnolia Home Entertainment

“A nonstop fusillade of imagination at work.” – The Hollywood Reporter

“Dazzling. Visionary. A daring, original adventure from another world.” – IndieWire

“One of the most gorgeous works of American animation in ages.” – The Film Stage 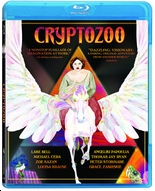 From visionary comic book writer, artist and filmmaker Dash Shaw (Discipline), Cryptozoo is a vibrant and fantastical animated feature following cryptozookeepers through a richly-drawn hallucinatory world as they struggle to capture a baku, a legendary dream-eating hybrid creature. In the visually stunning animation, the cryptozookeepers soon begin to wonder if they should display these rare beasts in the confines of a zoo, or if these mythical creatures should remain hidden and unknown.