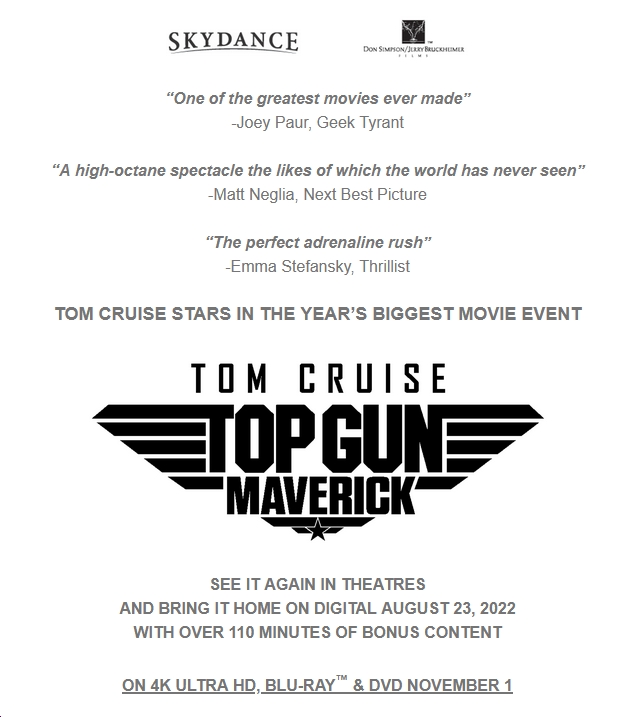 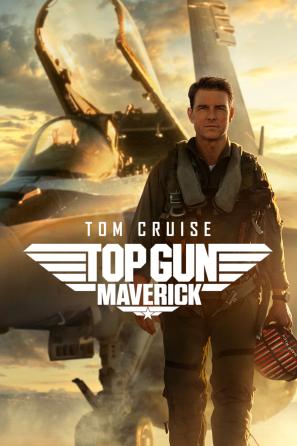 The TOP GUN: MAVERICK Digital* release takes fans deep inside the making of the global smash hit with over 110 minutes of action-packed bonus content.  Witness the cast’s intense flight training program, go behind-the-scenes as the filmmakers capture the most spectacular aerial sequences ever, and push the limits beyond Mach-10 with an experimental aircraft specially designed for the movie.  Plus, Tom Cruise shares his passion for aviation as he pilots his own aircraft and discusses his incredible career at the 75th Cannes Film Festival.  Finally, enjoy two music videos from Lady Gaga and OneRepublic.
TOP GUN: MAVERICK Digital* Bonus Content

Cleared For Take Off—Witness the most intense film training program as the cast prepare themselves for filming while pulling multiple G’s in a fighter plane.

Breaking New Ground – Filming Top Gun: Maverick—Prepare to take flight as you go behind-the-scenes with the cast and crew of Top Gun: Maverick on a journey to capture the most spectacular aerial sequences ever!

A Love Letter To Aviation—Tom Cruise shares his passion for aviation as he pilots his own aircraft, a vintage World War II P-51 Mustang, which would have been the Top Gun aircraft of its day.

Forging The Darkstar—Pushing the limits beyond Mach-10, the future of aviation is unveiled through an impressive experimental aircraft specially designed for the movie.

“I Ain’t Worried” – OneRepublic Music Video—Check out the music video to the original new song from OneRepublic.

TOP GUN: MAVERICK 4K Ultra HD
The 4K Ultra HD Blu-ray Disc™ boasts a Dolby Atmos® soundtrack remixed specifically for the home to place and move audio anywhere in the room, including overhead, and Dolby Vision™ high dynamic range (HDR), which delivers greater brightness and contrast, as well as a fuller palette of rich colors.**  The film will also be available in a 4K Ultra HD SteelBook.™ The 4K Ultra HD Blu-ray includes access to a Digital copy of the film as well as “Cleared For Take Off,” “Breaking New Ground – Filming Top Gun: Maverick,” “A Love Letter To Aviation,” “Forging The Darkstar,” “Masterclass with Tom Cruise – Cannes Film Festival,” and the two music videos.

TOP GUN: MAVERICK Synopsis
After more than 30 years of service as a top naval aviator, Pete “Maverick” Mitchell (Tom Cruise) is where he belongs, pushing the envelope as a courageous test pilot. Yet, Maverick must confront the ghosts of his past when he returns to TOP GUN to train a group of elite graduates and comes face-to-face with Lt. Bradshaw (Miles Teller), the son of his former wingman, “Goose”. Bitter rivalries ignite as the pilots prepare for a specialized mission, which will require the ultimate sacrifice from those chosen to fly it.