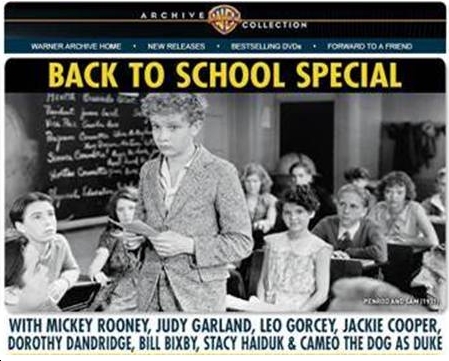 As the coals of Labor Day cool, and the children lick the last of the summer mustard off their lips, they know that the words “Back to School” are no longer a far off gossamer dream, but a dull hard truth. But fear not, seekers of wisdom! This school sampler sized selection of films and TV are guaranteed to make your school days a sight better than ol’e Tom Brown’s. And if you need any more sweeteners, we direct your attention to our now-extended annual Labor Day sale – details found below! And so, let us bid you a Q.E.D.

PENROD AND SAM (1931) The first talkie version of the Booth Tarkington classic is replete with pitch perfect schoolroom and schoolyard scenes that will have you looking for your very own gang of rascals. Leon Janney has the lead but Cameo the dog steals your heart.

ANDY HARDY COLLECTION VOLUME 1 and 2 (1937-58) Many of America’s favorite teen’s misadventures center around simply going to school – and dealing with it’s consequences. Mickey Rooney’s impersonation of a high school thespian in Andy Hardy Gets Spring Fever is a masterwork of comic acting, while his size-ism bashing collegial jitterbugging in Love Laughs at Andy Hardy is astonishment.

EVERYBODY SING (1938) This cautionary tale is a requisite warning to any juvenile musicians who may dare risk expulsion by introducing the plague of “swing music” to their schools. Thankfully Judy Garland has a dysfunctional family of performers waiting for her at home. With Allan Jones, Fanny Brice, Reginald Owen and Fanny Brice.

HELL’S KITCHEN (1939) Although Stanley Fields makes a more comical “Mayor of Hell” than ever Cagney did, this take on the gangster-turned-reform-school-reformer tale climaxes with a “youth in revolt” sequence featuring Leo Gorcey as a chilling Dead End Kid with murder on his mind. Also stars Ronald Reagan.

GALLANT SONS (1940) Jackie Cooper leads a squad of schoolyard sleuths (including Bonita Granville and Leo Gorcey) tasked with unfitting a parent – for murder. And if they fail, one of their chums might have to live … “with a goil!”

BRIGHT ROAD (1953) Dorothy Dandridge’s extraordinary gift for dramatics is on ample display in this inspirational tale of an idealistic school teacher’s first year. Harry Belafonte lends support as the school’s principal. Thanks to its large, enlightened heart, this poignant and insightful picture was a generation ahead of its time.

SUPERBOY SEASON 2 (1989-90) All Hail to Thee, Shuster U! Superboy’s sophomore season would prove to be his last at the campus’ hallowed halls before he graduates to become a government intern. Before that happens, collegiate complications abound – including new dormmate Andy McAllister (Ilan Mitchell-Smith)! Although shot in Orlando, the fictional Shuster University was set in Siegelville, Florida – both named after Superman’s creators, Joe Shuster and Jerry Siegel!