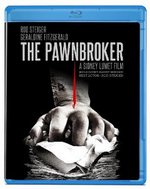 — who can’t escape the ghosts of his past. His soul robbed of hope, he takes refuge in misery and a bitter condemnation of humanity — the endless parade of prostitutes, pimps and thieves who pass through his shop — and ridicules his idealistic assistant, Ortiz, who dreams of a better life. Only when Ortiz, powerfully portrayed by Jaime Sanchez, puts his life on the line for Sol, does he learn the ultimate truth about hope and humanity. Under the brilliant direction of Sidney Lumet, Steiger’s first major starring role is among the finest of his career. Hugely controversial and denounced by everyone, including the Catholic Legion of Decency for a taboo-breaking nude scene, this landmark film remains not just powerful entertainment, but a stunning example of how movies can alter our emotions and perceptions forever. Two of the film’s best features are the gorgeous black-and-white cinematography by the great Boris Kaufman (“On the Waterfront”) and the memorable trumpet score by the legendary Quincy Jones. Remastered. Formats: Blu-ray, DVD. (Olive Films).

Newly remastered in HD for this release, “The Pawnbroker” is also being honored with a special screening as part of the 2014 TCM Film Festival.