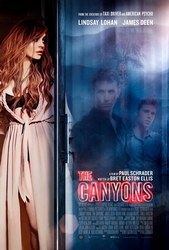 Director Paul Schrader (writer of “Raging Bull” and “Taxi Driver”) and screenwriter Bret Easton Ellis (author of “American Psycho”) team up for this searing indictment of Hollywood culture. Arrogant young trust-fund baby Christian (adult-film star James Deen) is working on financing a horror film simply to keep his dad off his back. His girlfriend Tara (Lindsay Lohan) is helping him with casting, and his producer, Gina (Amanda Brooks) is trying to get her struggling actor boyfriend Ryan (Nolan Funk) the lead role. Christian is also fond of inviting strangers into his home for threesomes or foursomes with the very willing Tara — and captures all the action on his smartphone. But unbeknownst to Christian and Gina, Ryan and Tara were once a couple, and as soon as the two meet again at an audition, their romance is rekindled. When Christian discovers that Tara has been having an affair, he begins to play a series of cruelly escalating mind games with both Ryan and Tara, thrusting everyone into a violent, sexually-charged tour through the dark side of human nature, one that leads to an act of violence from which there can be no redemption. Available in rated and unrated director’s cut. Vitals: Director: Paul Schrader. Stars: James Deen, Lindsay Lohan, Nolan Gerard Funk, Amanda Brooks, Tenille Houston, Gus Van Sant. 2013, CC, MPAA rating: R, 100 min., Drama, Box office gross: $.049 million, IFC Films.