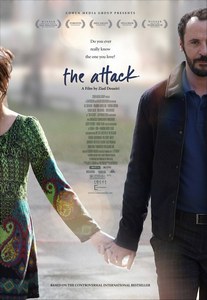 Palestinian surgeon Amin Jaafari (Ali Suliman) is fully assimilated into Tel Aviv society, has a loving wife, an exemplary career and many Jewish friends. But his picture-perfect life is turned upside down when a suicide bombing leaves 17 dead, and the Israeli police inform him that his wife Sihem (Reymonde Amsellem) not only died in the explosion, but was responsible for it. Initially interrogated as a possible accomplice, Amin is shaken further when he receives a posthumous letter from Sihem confirming her role in the carnage. Shattered by this revelation, Amin abandons the relative security of his adopted homeland to enter the Palestinian territories in pursuit of the zealots who recruited his wife. Based on Yasmina Khadra’s prize-winning and bestselling novel. In Arabic and Hebrew with English subtitles. Extras: Interview with director Ziad Doueiri, theatrical trailer, photo gallery. Vitals: Director: Ziad Doueiri. Stars: Ali Suliman, Reymonde Amsellem, Evgenia Dodena, Dvir Benedek, Uri Gavriel. 2013 — Lebanon/France/Qatar/Belgium, CC, MPAA rating: R, 95 min., Drama, Box office gross: $1.714 million, Cohen Media Group.