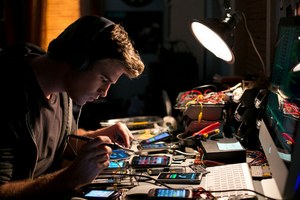 This run-of-the-mill and clichéd thriller takes place in the high-stakes, high-tech world of industrial spying — but you don’t need a smartphone to communicate how lame it is. When a savvy high-tech worker and his project team get fired for insubordination, Adam Cassidy (Liam Hemsworth) strikes back by using his expense account to treat his friends to a night on the town. The next morning he’s charged with fraud by company CEO Nicolas Wyatt (Gary Oldman), and forced to infiltrate Wyatt’s longtime rival’s (Harrison Ford) company to steal trade secrets. There’s the obligatory double-crossing, easesdropping, surveillance cameras, wire-tapping, and sex (with an Ivy League beauty, played by Amber Heard, who just happens to work for the company he’s infiltrated), and some physical threats, but none of it adds up in any meaningful way to give this unoriginal production any punch. As for the acting: Hemsworth is strictly a pretty face, Oldman and Ford telephone in their wooden performances, and Heard comes off as an imitation Scarlett Johansson. Skip it. Based on Joseph Finder’s New York Times best seller. Extras: Deleted scenes, “Privacy Is Dead” featurette, “The Paranoia Begins” production featurette, “The Players” behind the scenes featurette, theatrical trailer. Vitals: Director: Robert Luketic. Stars: Liam Hemsworth, Gary Oldman, Harrison Ford, Amber Heard, Josh Holloway, Embeth Davidtz, Richard Dreyfuss, Lucas Till. 2013, CC, MPAA rating: PG-13, 106 min., Thriller, Box office gross: $7.376 million, Fox.