“Indignation” and “Sausage Party.” For more information on other releases this week, see the Weekly Guide to Home Video Releases.

It’s hard to belive that it’s been 40 years since “Taxi Driver” (1976) — one of the greatest films of all time — hit the big screen and stunned audiences and critics alike. For his anniversary, Sony has given the film a 4K restoration and packaged it in a two-disc Blu-ray set. Robert De Niro stars in Martin Scorsese’s unforgettable tale of a psychotic New York cabbie driven to violence by loneliness and desperation. The acclaimed cast also includes Jodie Foster, Albert Brooks, Harvey Keitel, Peter Boyle and Cybill Shepherd. 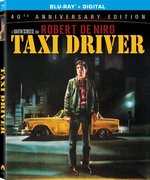 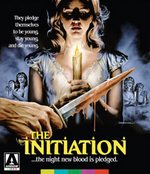 Kelly’s new sorority has a special initiation ritual in store for her — an after-hours break-in of her father’s department store. But what begins as a night of harmless college fun turns sour when, once inside the enormous mall, Kelly and her fellow pledges find themselves locked in for the night … with a deadly intruder stalking the corridors. Arriving in 1984, “The Initiation” might have been late to the slasher party, but, alongside the likes of “The House on Sorority Row” and “The Mutilator,” it remains one of the stronger entries to emerge in the latter 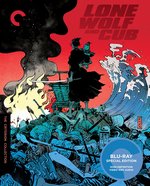 days of the slice-and-dice boom. Brand new 2K restoration from the original camera negative with uncompressed PCM Mono Audio. On Blu-ray from Arrow Video/MVD Entertainment … Based on the best-selling manga series, the six intensely kinetic “Lone Wolf and Cub” films (1972-72) elevated chanbara to bloody, new heights. The shogun’s executioner, Itto Ogami (Tomisaburo Wakayama), takes to wandering the countryside as an assassin — along with his infant son Daigoro (Akihiro Tomikawa) and an infinitely weaponized perambulator — helping those he encounters while seeking vengeance for his murdered wife. Delivering stylish thrills and a body count that defies belief, Lone Wolf and Cub is beloved for its brilliantly choreographed and unbelievably violent action sequences as well as for its tender depiction of the bonds between parent and child. On DVD, Blu-ray, in a new 2K digital restorations (of all six films), with uncompressed monaural soundtracks on the Blu-rays. From The Criterion Collection.

In “Capital” (2015) a street’s residents one day all receive an anonymous postcard through their front doors bearing a simple message: “We want what you have.” Who is behind the anonymous hate campaign? And what do they want? As the mystery of the postcards deepens, interweaving stories reveal lives filled with love and loss, fear and greed, 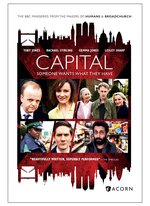 fortune and envy, and at its heart, family and home. Based on John Lanchester’s best-selling novel, the series stars Toby Jones, Gemma Jones and Rachael Stirling. From Acorn Media … AMC’s “The Making of the Mob: Chicago”(2016) is an eight-episode miniseries with an immersive blend of dramatic scenes, archival footage, visual effects and exclusive interviews, that documents the emergence of organized crime in Middle America through the rise and fall of iconic gangster Al Capone. From Capone’s early days in New York running the streets with Lucky Luciano and Bugsy Siegel, to his prolonged war with the Irish gangs of Chicago and his final battles with Eliot Ness and law enforcement, the series tells the true and full story of the Chicago underworld. From Anchor Bay Entertainment … “TURN: Washington’s Spies – The Complete Third Season” (2016) is a three-disc set with all 10 episodes of AMC’s critically acclaimed Revolutionary War drama. Jamie Bell stars as Abraham Woodhull, a farmer living in British-occupied Long Island during the Revolutionary War, who bands together with a disparate group of childhood friends to form the Culper Ring – America’s first spy ring. This season builds toward one of the most notorious moments in American history — the treasonous defection of Benedict Arnold. From Anchor Bay. 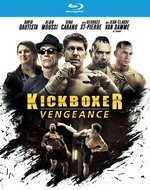 Seeking a new start, they find refuge in the small town of Mooseheart. It doesn’t take long before the besmirched family name catches up to them. Joey, a free spirited stoner, and Trent, a love sick pessimist, look like the main suspects after a string of murders, similar to a rash of killings 20 years earlier, coincidentally begins just as they arrive in town. It is a race against time because a slash-happy killer clown on the loose and the bodies begin piling up. From Screen Media Films … When a ruthless and undefeated fighter brutally ends a modern-day warrior’s life in a no-holds-barred match in Thailand, his brother devotes himself to training with a master in a quest for redemption … and revenge in “Kickboxer: Vengeance” (2016), starring David Bautista, Gina Carano, Cain Velasquez, Fabricio Werdum, Sara Malakul Lane, Alain Moussi, Georges St-Pierre and Jean-Claude Van Damme. On DVD, Blu-ray from RLJ Entertainment … “Morris From America” (2016), starring Craig Robinson, Markees Christmas and Lina Keller, is a coming-of-age comedy with a unique spin that centers on Morris Gentry (Christmas) a 13-year-old who has just relocated with his single father, Curtis (Robinson) to Heidelberg, Germany. Morris, who fancies himself the next Notorious B.I.G., is a complete fish-out-of-water — a budding hip-hop star in an EDM world. To complicate matters further, Morris quickly falls hard for his cool, rebellious, 15-year-old classmate Katrin. Morris sets out 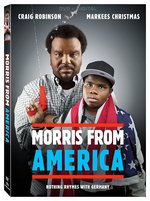 against all odds to take the hip-hop world by storm and win the girl of his dreams. On DVD, Blu-ray from Lionsgate … “Band of Robbers” (2015), starring Kyle Gallner, Adam Nee, Matthew Gray Gubler and Melissa Benoist, is a modern-day adventure that imagines Tom Sawyer and Huck Finn as grown men, still searching for the hidden treasure that has eluded them since childhood. From Filmrise/MVD Visual … Betsy Rue, Daniel Emery Taylor, Constance Medrano. Five years after the brutal events that befell Skye and Beth inside Old Saint Leopold’s Hospital in “The Hospital” — in which a group of young people are terrorized by a psychopathic, necrophiliac serial rapist — the two survivors continue to pick up the shattered pieces of their lives in “The Hospital 2” (2016). With news of the past violent events resurfacing in the press and media, the two ladies face dealing with those ugly memories all over again. From ITN Distribution/MVD Visual.

“Boonville Redemption” (2016), starring Emily Hoffman, Pat Boone, Edward Asner, Diane Ladd, and Richard Tyson is a faith-based Western set in 1906. Thirteen-year-old Melinda is unhappy with the hand that life has dealt her. Born out of wedlock and scorned by many, Melinda desperately wants to know what happened to her real father, but no one will tell her. Determined to do all within her power to find her father, Melinda’s bravery compels some of the townspeople to reveal the dark secrets that they have kept to themselves for years. From Engine 15/MVD Visual. 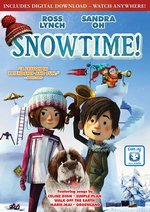 “Snowtime!” (2016) is an animated family film with the voices of Ross Lynch, Sandra Oh, Angela Galuppo, Lucinda Davis, Sonja Ball, Don Shepherd, Jenna Wheeler, Heidi Lynne Weeks, Elisabeth MacRae and Holly Gauthier, and features songs by Celine Dion, Simple Plan, Walk Off The Earth, Marie-Mai and Groenland. To amuse themselves during the winter school break, the kids in a small village decide to have a massive snowball fight. Luke and Sophie, both 11 years old, become the leaders of the opposing sides. Sophie and her cohorts defend an elaborate snow fort against the assault of Luke’s horde. Whichever side occupies the fort at the end of the winter break, wins! But what starts out as pure youthful fun and enthusiasm deteriorates into a more serious conflict. Can joy and peace be restored, or will the kids’ friendships fall in a flurry of ice and snow? On DVD, 3D Blu-ray/Blu-ray/DVD Combo, from Shout! Factory Kids.