“Rampage,” “Isle of Dogs,” “Super Troopers 2,” “I Feel Pretty” and “Blumhouse’s Truth or Dare.” For more information on other releases this week, see the Weekly Guide to Home Video Releases. 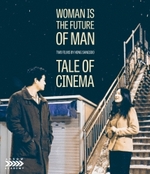 affair with the same woman (Sung Hyunah). The friends decide to meet the girl one more time and see what happens. “Tale of Cinema” uses the trope of a film within a film to tell two stories, that of a depressive young man (Lee Kiwoo) who forms a suicide pact with a friend (Uhm Jiwon); and the tale of a filmmaker (Kim Sangkyung) who sees a film that he believes was based on his life, and who meets the actress from the film with a view to turning their onscreen relationship into reality. With these critically acclaimed films, presented here in high definition for the first time with a wealth of extras, Hong Sangsoo employs his idiosyncratic, measured style to create two compelling and truthful tapestries of human emotion and behavior. On Blu-ray from Arrow Academy/MVD Entertainment.

“sex, lies, and videotape”(1989): With his provocative feature debut, 26-year-old Steven Soderbergh trained his focus on the complexities of human intimacy and deception in the modern age. Housewife Ann (Andie MacDowell) feels distant from her lawyer husband, John (Peter Gallagher), who is sleeping with her sister (Laura San Giacomo). When John’s old friend Graham (a magnetic, Cannes-award-winning James Spader) comes to town, Ann is drawn to the soft-spoken outsider, eventually uncovering his startling private obsession: videotaping women as they confess their deepest desires. A piercingly intelligent and flawlessly performed chamber piece, in which the video camera becomes a charged metaphor for the characters’ isolation, the Palme d’Or–winning “sex, lies, and videotape” changed the landscape of American film, helping pave the way for the thriving independent scene of the 1990s. On DVD and Blu-ray, with new, restored 4K digital transfer, supervised by director Steven Soderbergh, with 5.1 surround DTS-HD Master Audio soundtrack on the Blu-ray. From The Criterion Collection. 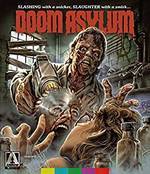 deformed maniac, driven to madness by the tragic loss of his fiancée in a car accident. With an array of grisly surgical tools at his disposal, it’s only a matter of time before the youngsters begin meeting various splattery ends at the hands of the ghoulish Coroner. Brand new 2K restoration from the original camera negative. On Blu-ray from Arrow Video/MVD Entertainment.

“The Case of the Scorpion’s Tail” (1971): One of the major consequences of Western Europe’s post-war Economic Miracle was the proliferation of international travel. Eager to tap into audiences’ desire to experience the glamor of the jet set lifestyle, the popular filmmakers of the day rushed to make the most of the exotic locales at their disposal. Arguably no other giallo captured this trend as vividly as “The Case of the Scorpion’s Tail.” The film begins in London, where Lisa Baumer (Evelyn Stewart) learns that her husband has died in a freak plane accident. Summoned to Athens to collect his generous life insurance policy, she soon discovers that others besides herself are keen to get their hands on the money — and are willing to kill for it. Meanwhile, private detective Peter Lynch (George Hilton) arrives to investigate irregularities in the insurance claim. Teaming up with a beautiful reporter, Cléo Dupont (Anita Strindberg), Lynch resolves to unearth the truth … before he too ends up on the wrong end of the murderer’s straight razor. The second giallo by genre master Sergio Martino, “The Case of the Scorpion’s Tail” combines stunning views of Athens and the Greek coastline with brutal bursts of violence, a typically tangled script by Ernesto Gastaldi (“Death Walks on High Heels”), and a cast overflowing with Euro cult talent. Brand new 4K restoration of the film from the original camera negative. On Blu-ray from Arrow Video/MVD Entertainment. 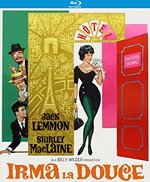 “Irma La Douce” (1963): The stars and director of “The Apartment” reunite in the bawdy, charming and romantic farce about a French policeman (Lemmon) who falls in love with a prostitute. To keep his beloved, the proud and profitable lady of the streets Irma la Douce (MacLaine), off the streets, he disguises himself as Lord X, who immediately becomes Irma’s sole client and means of support. But what’s a jealous boyfriend to do when the illustrious Irma claims that the man she’s really in love with is not the smitten Nestor, but the dotty old Lord himself? The wonderful character actors Lou Jacobi and Herschel Bernardi co-star in this classic comedy co-written and directed by the great Billy Wilder. André Previn won an Oscar for his rousing score. The film also received Oscar nominations for Best Actress in a leading role (MacLaine) and Best Cinematography, Color (Joseph LaShelle). Brand new HD master from a 4K scan of the original camera negative. On Blu-ray from Kino Lorber Studio Classics.

“The Good Place: The Complete Second Season” (2017-18) is a two-disc set with all 13 episodes. When Eleanor Shellstrop (Kristen Bell) finds herself in the afterlife, she’s both relieved and surprised that she’s made it into the Good Place. But it doesn’t take long for Eleanor to realize she’s there by mistake. Co-stars Jameela Jamil, Manny Jacinto, Ted Danson, D’Arcy Carden. Formats: DVD. From Shout! Factory … “Modus Season 1” (2015) is a single-disc set 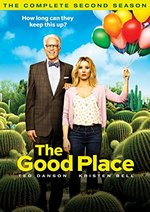 with all eight episodes. A smart and brooding Swedish detective series that follows psychologist and ex-FBI profiler Inger Johanne Vik (Melinda Kinnaman) as she finds herself and her autistic daughter drawn into an investigation of a series of disturbing and brutal deaths in Stockholm. The case leads her to team up with local detective Ingvar Nymann (Henrik Norle´n) and together they set about uncovering the clues to these shocking crimes. As the number of mysterious murders starts to increase, Inger Johanne is driven by her need to protect her daughter and starts noticing a pattern. But her discovery of the killer’s weakness and the connection to a ruthless international network unintentionally turns the entire threat towards herself and her family. On DVD, Blu-ray, from Kino Lorber … “Sneaky Pete: Season 1” (2017) is a single disc with 10 episodes. A con man (Giovanni Ribisi) on the run from a vicious gangster takes cover from his past by assuming 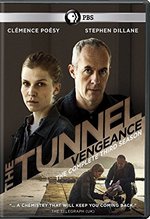 the identity of his prison cellmate, Pete. “Reuniting” with Pete’s estranged family, a colorful, dysfunctional group, threatens to drag him into a world just as dangerous as the one he’s trying to escape — and, just maybe, give him a taste of the loving family he’s never had. From Sony … “The Tunnel: Vengeance Season 3” (2018) is the final season of the critically acclaimed bilingual crime thriller reunites Stephen Dillane in his International Emmy Award-winning role as Karl Roebuck with Clémence Poésy as Elise Wassermann for their last outing as the unlikely Anglo-French police duo. This season, the investigative pair takes on a toxic and terrifying folie à deux whose mutual defining quality is an existential death wish. When the question posed by the couple — what is a life worth? — is directed straight back at Karl, he is forced to confront an utterly impossible choice that will haunt the audience long after the closing credits. Set amidst mid-Brexit hysteria, “The Tunnel: Vengeance” tackles an escalating refugee crisis and examines the increasing threat of terror occasioned by disenfranchised, exiled souls on whom society has turned its back. From PBS Distribution.

In “You Were Never Really Here” (2018), starring Joaquin Phoenix, Ekaterina Samsonov, Alessandro Nivola and Judith Roberts, a traumatized veteran, unafraid of violence, tracks down missing girls for a living. When a job spins out of control, his nightmares overtake him as a conspiracy is uncovered leading to what may be his death trip or his awakening. On DVD, Blu-ray,from Lionsgate … “Across the River” (2018 — UK), starring Elizabeth Healey, Keir Charles and Liz Richardson, is a “slice of life” story about one couple’s second-chance at goodbye. It’s the emotionally resonant tale of first lovers reunited by accident as both, thwarted by the challenges of a public transportation strike, seek to get home on a busy London afternoon — but to opposite sides of the river. As they reminisce, laugh and cry, the reality of their current lives pulls them apart, but the memory of what they had — and could have had — tempts them. From Random Media.