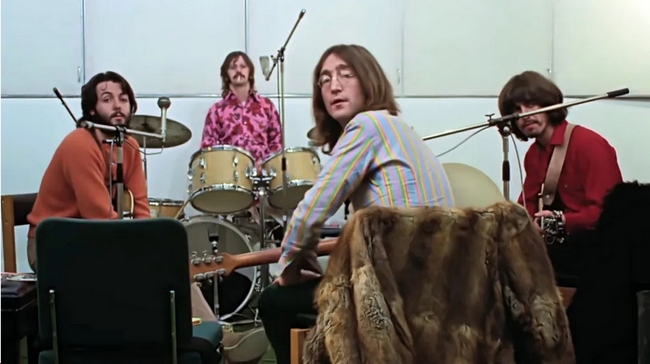 Directed by Peter Jackson, “The Beatles: Get Back” (2021) is a three-part documentary series that takes audiences back in time to the band’s intimate recording sessions. The documentary showcases the warmth, camaraderie and creative genius that defined the legacy of the iconic foursome, and is compiled from 60 hours of unseen footage shot in January 1969 (under the supervision of Michael Lindsay-Hogg and his director of photography Tony Richmond), and more than 150 hours of unheard audio, all of which has been brilliantly restored. Also featured — for the first time in its entirety — is The Beatles’ last live performance as a group — the unforgettable rooftop concert on London’s Savile Row — as well as other songs and classic compositions featured on the band’s final two albums, “Abbey Road” and “Let It Be.” On DVD, Blu-ray from Disney. Read more here … With “Raging Bull 4K UHD” (1980), his stunningly visceral portrait of self-destructive machismo, Martin Scorsese created one of the truly great and visionary works of modern cinema. Robert De Niro pours his blood, sweat, and brute physicality into the Oscar-winning role of Jake La Motta, the rising middleweight boxer from the Bronx whose furious ambition propels him to success within the ring but whose unbridled paranoia and jealousy tatter his relationships with everyone in his orbit, including his brother and manager (Joe Pesci) and gorgeous, streetwise wife (Cathy Moriarty). Thelma Schoonmaker’s Oscar-winning editing, Michael Chapman’s extraordinarily tactile black-and-white cinematography, and Frank Warner’s ingenious sound design combine to make Raging Bull a uniquely powerful exploration of violence on multiple levels-physical, emotional, psychic, and spiritual. Formats: Blu-ray, 4K Ultra HD with new 4K digital master, approved by director Martin Scorsese, with 2.0 surround DTS-HD Master Audio soundtrack. In the 4K UHD edition: One 4K UHD disc of the film presented in HDR and one Blu-ray with the film and special features. Read more here. From The Criterion Collection … With “Summertime” (1955), his sublimely bittersweet tale of romantic longing, director David Lean left behind the British soundstage to capture in radiant Technicolor the sun-splashed glory of Venice at the height of summer. In a tour de force of fearless vulnerability, Katharine Hepburn portrays the conflicting emotions that stir the heart of a lonely, middle-aged American tourist who is forced to confront her insecurities when she is drawn into a seemingly impossible affair with a charming Italian shopkeeper (Rossano Brazzi) amid the ancient city’s canals and piazzas. Lean’s personal favorite among his own films, “Summertime” is an exquisitely tender evocation of the magic and melancholy of a fleeting, not-quite-fairy-tale romance. On DVD, Blu-ray, with new 4K digital restoration, with uncompressed monaural soundtrack on the Blu-ray. Read more here. From The Criterion Collection.

“I’m Charlie Walker” (2022), starring Mike Colter, Dylan Baker, Safiya Fredericks, Mark Leslie Ford, Steven Wiig and Carl Lumbly is based on a true story. Colter stars as trucking and construction entrepreneur Charlie Walker. In 1971, two oil tankers violently collided off the San Francisco Coast spilling millions of gallons of crude oil creating an environmental disaster. Against all odds, Charlie was able to secure one of the most lucrative contracts to clean the coastline that threatened much of the San Francisco Bay. With only three trucks, an incredible work ethic and a whole lot of heart, the film recounts the racial discrimination Walker endured as he tries to save the coastline all while fighting institutional racism from the very company that hired him in the first place. From Shout! Studios.

“Pompo the Cinephile” (2021) is an animated story based on the popular manga series by Shogo Sugitani. Pompo is a talented and gutsy producer in “Nyallywood,” the movie-making capital of the world. Although she’s known for B-movies, one day Pompo tells her movie-loving but apprehensive assistant Gene that he will direct her next script: a delicate drama about an aging and tormented creative genius, starring the legendary and Brando-esque actor Martin Braddock, and a young actress seeking her first break. But when the production heads towards chaos, can Gene rise to Pompo’s challenge, and succeed as a first-time director? On Blu-ray/DVD Combo, from GKIDS/Shout! Factory.

“Aqua Teen Hunger Force: The Baffler Meal Complete Collection” (2000-15) is a complete collection — 20 discs — includhttps://onvideo.org/?p=23678&preview=trueing all 140 episodes from the hit series’ 11 season run, as well as the first theatrical film titled “Aqua Teen Hunger Force Colon Movie Film For Theaters,” plus hours of bonus content. From Warner … “Batwoman: The Third and Final Season” (2021-22) i sa three-disc set with all 13 episodes. Season two was transformational for the Bat Team and the entire city of Gotham City with the arrival of Ryan Wilder as Batwoman. In season three, Ryan must now lead the Bat Team in stopping the next wave of villains created by the weapons lost in the Gotham River during the suspenseful season two finale. On top of everything, Ryan will have to battle these villains with Alice by her side! As a new generation of Rogues torments Gotham, Batwoman and Alice must work together to stop them, which is a predicament that threatens to upend the team’s existing dynamics for good. On DVD, Blu-ray, from Warner … “The Six Million Dollar Man: The Complete Series” (1974-78) is a thirty-three disc collector’s edition with all 99 episodes, the three pilot films, new audio commentary with author Herbie J. Pilato and much more. When an aircraft crash leaves him barely alive, Colonel Steve Austin (Lee Majors) is rebuilt with cutting-edge bionic technology. Now, atomic-powered limbs propel him at speeds of 60 mph, giving him the ability to overturn massive objects and take on the world’s most nefarious villains and their evil plans. Join one of TV Guide’s “24 Greatest Action Heroes” as he tackles top-secret missions that left millions of fans breathless for five thrilling seasons and more. On Blu-ray from Shout! Factory. Read more here … “Star Trek: Lower Decks – Season Two” (2021)is a two-disc set with all 10 episodes of the animated series that focuses on the support crew serving on one of Starfleet’s least important ships, the U.S.S. Cerritos, as they deal with changes in group dynamics, chasing promotions, and tons of sci-fi missions. On DVD, Blu-ray, from Paramount.