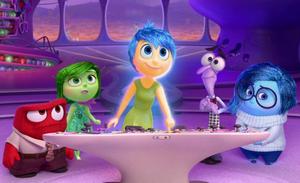 Animated adventure that takes place in the brain of a young girl. Growing up can be a bumpy road, and it’s no exception for Riley, who is uprooted from her Midwest life when her father starts a new job in San Francisco. Like all of us, Riley is guided by her emotions — Joy (Amy Poehler), Fear (Bill Hader), Anger (Lewis Black), Disgust (Mindy Kaling) and Sadness (Phyllis Smith). The emotions live in Headquarters, the control center inside Riley’s mind, where they help advise her through everyday life. As Riley and her emotions struggle to adjust to a new life in San Francisco, turmoil ensues in Headquarters. Although Joy, Riley’s main and most important emotion, tries to keep things positive, the emotions conflict on how best to navigate a new city, house and school. Vitals: Director: Pete Docter. Stars: Voices of Amy Poehler, Lewis Black, Mindy Kaling, Bill Hader, Phyllis Smith, Kaitlyn Dias, Diane Lane, Kyle MacLachlan. 2015, CC, MPAA rating: PG, 102 min., Family Animated, Box office gross: $339.354 million, (Pixar/Disney. Extras: “LAVA” (theatrical short film): inspired by the isolated beauty of tropical islands and the explosive allure of ocean volcanoes,this is a musical love story that takes place over millions of years; commentary with directors Pete Docter and Ronnie del Carmen, and producer Jonas Rivera. Blu-ray adds “Riley’s First Date?” exclusive animated short film; “Story of the Story” featurette; “Paths to Pixar: The Women of Inside Out” featurette; “Mixed Emotions” featurette. “Mapping the Mind” in which the movie’s artists take you through the years-long process of designing and creating a world everyone knows, but no one has ever seen – the human mind; “Our Dads, the Filmmakers” behind the scenes with Elie Docter (daughter of director, Pete Docter) and Grace Giacchino (daughter of composer, Michael Giacchino); “Into the Unknown: The Sound of Inside Out;” “The Misunderstood Art of Animation Film Editing”; selected scenes; “Mind Candy,” a montage of toolkit and interstitials produced for “Inside Out”; trailers.