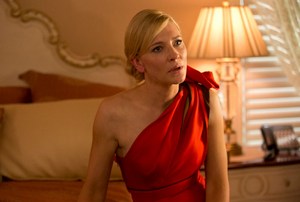 Say what you will about the reclusive, aloof, perhaps kinky Woody Allen — the man loves women. In particular, he loves the women in his films (sometimes literally), creating great roles for the likes of Diane Keaton, Mia Farrow, Mira Sorvino, Julia Louis-Dreyfus, Scarlett Johansson, Rebecca Hall and Naomi Watts, to name just a few — and now he’s created a great one for Cate Blanchett. Blanchett puts in an Oscar-worthy tour-de-force performance as a spoiled, elegant Manhattan socialite whose life falls apart — figuratively and literally — after her doting businessman husband is arrested for securities fraud. Virtually penniless, she moves to San Francisco to live in her sister’s apartment, where she struggles to pull herself back together again despite her upper-class snobbery rubbing up against her new blue-collar existence. She’s precariously balanced on an emotional tightrope between her troubled past and her fresh start, dreaming of her lost glamour but all the while neglecting to take responsibility for her complicity in her past failings. A remarkable outing. Extras: “Notes From the Red Carpet,” in which the cast discusses making the film and their take on the characters; “Blue Jasmine” cast press conference with Cate Blanchett, Peter Saarsgard and Andrew Dice Clay. Vitals: Director: Woody Allen. Stars: Cate Blanchett, Alec Baldwin, Michael Stuhlbarg, Peter Sarsgaard, Alden Ehrenreich, Louis C.K., Sally Hawkins, Bobby Cannavale, Tammy Blanchard, Andrew Dice Clay. 2013, CC, MPAA rating: PG-13, 98 min., Drama, Box office gross: $32.519 million, Sony.