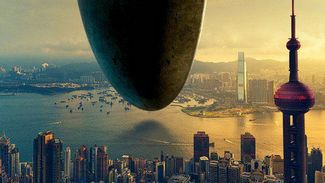 As far as alien arrival films go, this has to be one of the tamest ever. No cities destroyed. No humans pulverized. No flying saucer attacks. Instead, we get an arrival by 12 strange space crafts — aligned in different sectors of the world — occupied by aliens who just want to communicate with us. Each major government puts together a team of scientists to try to figure out the aliens’ language — the U.S. team is headed up by expert linguist Louise Banks (Amy Adams) and theoretical physicist Ian Donnelly (Jeremy Renner). As Banks and Donnelly get closer to understanding the aliens’ language — and hence the reason for their visit to Earth — the Russians and Chinese get skittish and demand that the aliens leave or face nuclear weapons. As the world prepares for war, Banks figures out the meaning of the aliens’ language, but has very little time in which to prevent total annihilation. Thanks to director Denis Villeneuve (“Sicario”) for nicely handling a thinking person’s sci-fi film that slowly builds in excitement and revelations, and thanks for Eric Heisserer’s cerebral screenplay based on Ted Chiang’s story “Story of Your Life.” And kudos to Adams for putting in an understated, nuanced, emotionally warm performance. A real viewing pleasure. Vitals: Director: Denis Villeneuve. Stars: Amy Adams, Jeremy Renner, Forest Whitaker, Michael Stuhlbarg, Mark O’Brien. 2016, CC, MPAA rating: PG-13, 116 min., Science Fiction, Box office gross: $94.213 million, Paramount. Blu-ray extras: “Xenolinguistics: Understanding Arrival,” “Acoustic Signatures: The Sound Design,” “Eternal Recurrence: The Score,” “Nonlinear Thinking: The Editorial Process,” “Principles of Time, Memory & Language.”