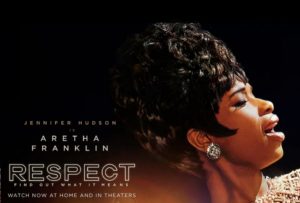 SHOWCASING A SPECTACULAR ENSEMBLE CAST INCLUDING

OWN IT ON DIGITAL NOW

Experience the cinematic music event of the year featuring Oscar® and Grammy® Award winner and vocal powerhouse Jennifer Hudson (Dreamgirls) as legendary singer Aretha Franklin in the inspiring true story RESPECT, available to own for the first time on Digital now and on Blu-ray™ and DVD November 9, 2021 from Universal Pictures Home Entertainment. Hailed by critics as “electrifying” (David Rooney, The Hollywood Reporter) and “extraordinary” (Pete Hammond, Deadline), MGM’s musical biopic gives an authentic inside look at the life and legacy of one of the greatest, most influential recording artists of all time.

Following the rise of Aretha Franklin’s career from a child singing in her father’s church’s choir to her international superstardom, RESPECT is the remarkable journey of the music icon’s path to find her voice. The film on Blu-ray™, DVD and Digital comes packed with all-new exclusive bonus content including behind-the-scenes featurettes about Jennifer Hudson’s transformation into the Queen of Soul, director Liesl Tommy’s filmmaking process, the creation of the beautiful sets and custom wardrobes, Aretha’s experience at Muscle Shoals, and more taking audiences deeper into the empowering story and world-renowned chart-topping music that has become a global anthem for strength, independence and positivity.

Directed by Tony Award® nominee Liesl Tommy (“Insecure”, “The Walking Dead”) from a screenplay written by Emmy Award® nominee Tracey Scott Wilson (“Fosse/Verdon”, “The Americans”) and story by Academy Award® winner Callie Khouri (“Thelma & Louise”), RESPECT is the biggest female-led musical drama in recent history and a must own film with extraordinary showstopping performances to watch over and over in spectacular Dolby Atmos quality sound, available exclusively on Blu-ray™.