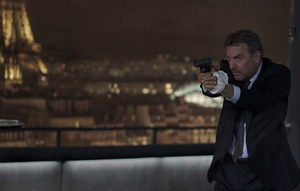 A dying CIA agent is determined to give up his high stakes life in the time he has left to finally build a closer relationship with his estranged wife and daughter, whom he’s previously kept at arm’s length to keep out of danger. While tentatively reconnecting with his family, he’s offered an experimental drug that could save his life in exchange for one last mission — but it means juggling the two toughest assignments yet: Hunting down the world’s most ruthless terrorist and looking after his teenage daughter for the first time in 10 years while his wife is out of town. Extras: TBA. Vitals: Director: McG. Stars: Kevin Costner, Hailee Steinfeld, Amber Heard, Connie Nielsen, Tomas Lemarquis, Richard Sammel. 2014, CC, MPAA rating: PG-13, 117 min., Thriller, Box office gross: $28.462 million, Relativity.