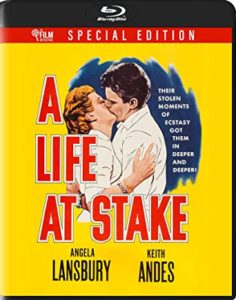 From director Paul Guilfoyle comes this highly charged mystery starring Angela Lansbury and Keith Andes. At the time, Lansbury—starring in an unlikely role as charming femme fatale—was already a double Oscar nominee for Gaslight (1944) and The Picture of Dorian Gray (1945).

In this independent production from the waning golden years of film noir, spoiled, young Doris Hillman (Lansbury) invites struggling architect Edward Shaw (Andes) to be her husband’s partner in a lucrative real estate deal. However, when Edward becomes romantically involved with Doris, he learns that something deadly is going on. There’s a life at stake … and it could be his own.

SPECIAL FEATURES: In addition to a newly restored presentation, with a striking 4K transfer from archival film elements, exclusive bonus materials include audio commentary and the full-color booklet, ​A Career at Stake: Angela Lansbury and the Last Days of the B Noir, by professor and film scholar, Jason A. Ney; and Hollywood Hitch-hikers: Inside the Filmakers, an original production from Ballyhoo Motion Pictures. English and Spanish subtitles are available.

‘The Emperor’s Sword’ Is Unleashed on Digital, Disc Nov. 9

Warner Archive New Releases: The Swine and the Horror