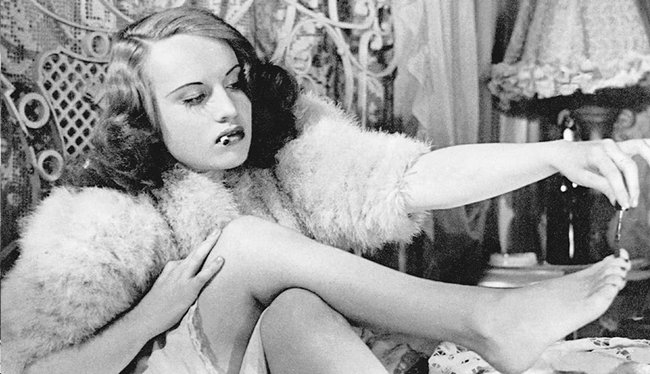 A mysterious writer of poison-pen letters, known only as Le Corbeau (the Raven), plagues a provincial French town, exposing the collective suspicion and rancor seething beneath the community’s calm surface in “Le corbeau” (1943). Made during the Nazi occupation of France, this film by Henri-Georges Clouzot was attacked by the right-wing Vichy regime, the left-wing Resistance press, and the Catholic Church, and was banned after the country’s liberation. But some — including Jean Cocteau and Jean-Paul Sartre — recognized the powerful subtext to Clouzot’s anti-informant, anti-Gestapo fable and worked to rehabilitate his directorial reputation after the war. “Le Corbeau” brilliantly captures the spirit of paranoid pettiness and self-loathing that turns an occupied French town into a 20th-century Salem. In a Blu-ray debut, with new 4K restoration, with uncompressed monaural soundtrack. From The Criterion Collection. Read more here … One of the defining independent films of the 1990s, Atom Egoyan’s mesmerizing international breakthrough “Exotica” (1994) takes the conventions of the psychological thriller into bold new territory — unsettling, dreamlike, and empathetic. At the neon-drenched Toronto strip club of the film’s title, a coterie of lost and damaged souls — including a man haunted by grief (Bruce Greenwood), a young woman with whom he shares an enigmatic bond (Mia Kirshner), an obsessive emcee (Elias Koteas), and a smuggler of rare bird eggs (Don McKellar) — search for redemption as they work through the traumas of their mysteriously interconnected histories in an obsessive cycle of sex, pain, jealousy, and catharsis. Masterfully weaving together past and present, Egoyan constructs a spellbinding narrative puzzle, the full emotional impact of which doesn’t hit until the last piece is in place. On DVD, Blu-ray, with new, restored 4K digital transfer, supervised and approved by director Atom Egoyan and director of photography Paul Sarossy, with 2.0 surround DTS-HD Master Audio on the Blu-ray. From The Criterion Collection. Read more here.

In an effort to heal after witnessing her sister’s horrific murder, Nic travels to a tropical resort with her friends for a kayaking and diving adventure in “The Reef: Stalked” (2022), starring Teressa Liane, Ann Truong, Saskia Archer, Kate Lister and Tim Ross. Only hours into their expedition, the women are stalked and then attacked by a great white shark. To survive, they will need to band together, and Nic will have to overcome her post-traumatic stress, face her fears and slay the monster. On DVD, Blu-ray from RLJE Films … “Vengeance” (2022), starring B.J. Novak, Boyd Holbrook, J. Smith-Cameron, Issa Rae, Ashton Kutcher, Lio Tipton and Dove Cameron, the directorial debut from writer and star Novak (“The Office”), is a darkly comic thriller about Ben Manalowitz, a journalist and podcaster who travels from New York City to West Texas to investigate the death of a girl he was hooking up with. On DVD, Blu-ray, from Universal.

“The Equalizer: Season Two” (2021-22) is a four-disc set with all 18 episodes. A reimagining of the classic series starring Academy Award nominee and multi-hyphenate Queen Latifah as Robyn McCall, an enigmatic woman with a mysterious background who uses her extensive skills as a former CIA operative to help those with nowhere else to turn. McCall presents to most as an average single mom who is quietly raising her teenage daughter. But to a trusted few, she is The Equalizer – an anonymous guardian angel and defender of the downtrodden, who’s also dogged in her pursuit of personal redemption. From CBS/Paramount … “Outlander Season Six” (2022) is a four-disc set with all eight episodes. A continuation of Claire and Jamie’s epic fight to protect those they love as they navigate the trials and tribulations of life in the New World. The series follows the Frasers as they strive to maintain peace and flourish within a colonial society which – as Claire knows all too well – is unwittingly marching toward Revolution. On DVD, Blu-ray, Blu-ray Collector’s Set from Sony … “Theodore Roosevelt” (2021) is a two-part docuseries exploring the depth and breadth of the compelling life of the 26th and youngest president of the United States, written by world-renowned presidential historian and Pulitzer Prize-winning, best-selling author Doris Kearns Goodwin. Explores the life of one of history’s most fascinating figures — a cowboy, soldier, statesman, conservationist, adventurer, reformer, author, and finally, U.S. president. Featuring over five hours of expert interviews, rich archival material, and vivid live-action sequences. Stars Rufus Jones, Marco Mintaka, Greg Kriek, Stevel Marc. From Lionsgate.