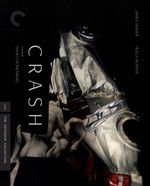 producer, James (James Spader), and an enigmatic doctor, Helen (Holly Hunter), brings them, along with James’s wife, Catherine (Deborah Kara Unger, in a sublimely detached performance), together in a crucible of blood and broken glass — and it’s not long before they are all initiated into a kinky, death-obsessed underworld of sadomasochistic car-crash fetishists for whom twisted metal and scar tissue are the ultimate turn-ons. Controversial from the moment it premiered at Cannes — where it won a Special Jury Prize “for originality, for daring, and for audacity” — “Crash” has since taken its place as a key text of late-20th-century cinema, a disturbingly seductive treatise on the relationships between humanity and technology, sex and violence, that is as unsettling as it is mesmerizing. Formats: DVD, Blu-ray, with new 4K digital restoration supervised by director of photography Peter Suschitzky, and 5.1 surround DTS-HD Master Audio soundtrack “The Curse of Frankenstein” (1957) is the first, and perhaps the best of the long-running series of horror films from the house of Hammer. Peter Cushing and Christopher Lee star in this landmark interpretation based on the famous Mary Shelley story. Baron Victor Frankenstein becomes friends with one of his teachers, Paul Krempe. At first, both men are fascinated by the potential of their re-animating experiments. Eventually, though, Krempe on the Blu-ray, both approved by director David Cronenberg. From The Criterion Collection … 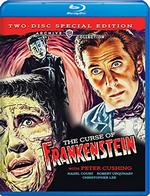 refuses to help with Frankenstein’s human experiments. However, he is drawn back into the plot when Frankenstein’s creature kills a member of the house staff. A deluxe 2 Disc Special Edition, featuring two theatrical aspect ratio presentations, meticulously remastered and restored in 4k scans from preservation separations, as well as bonus disc with the restoration presented in “open-matte” format, as was seen for years on television. In a Blu-ray debut from Warner Archive … For the 40th Anniversary of director Robert Altman’s vision of the famous cartoon character, “Popeye” (1980), starring Robin Williams. Paramount has debuted the film on Blu-ray. Looking for the father (Ray Walston) who deserted him as a baby, a sailor named Popeye (Williams) journeys to the port town of Sweethaven. Popeye befriends an assortment of eccentrics and falls in love with Olive Oyl (Shelley Duvall), who already has a suitor, the bully Bluto (Paul L. Smith). Popeye also discovers an abandoned baby, Swee’Pea, whom he raises as his own. But when the spurned Bluto kidnaps Olive and the 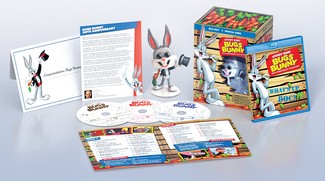 child, Popeye takes action, with the help of his magic spinach. Legendary producer Robert Evans and screenwriter Jules Feiffer worked for nearly three years to get “Popeye” into production. The film combined the talents of director Altman, composer and lyricist Harry Nilsson, numerous filmmaking artisans, and an outstanding cast of actors, mimes, athletes and street performers to bring the world of the beloved character to life … The “Bugs Bunny 80th Anniversary Collection” is available in a collector’s gift set that includes a full-size glitter Funko figure. The three-disc collection features 60 shorts along with bonus content, including 10 episodes of Looney Tunes Cartoons, a documentary and collectible memorabilia. On Blu-ray, from Warner. Read more here.

“Perry Mason: The Complete First Season” (2020) is a two-disc set with all eight episodes of the HBO series that follows the origins of American fiction’s most legendary criminal defense lawyer, Perry Mason, set in a noirish 1930s Los Angeles. When the case of the decade breaks down his door, Mason’s relentless pursuit of the truth reveals a fractured city and just maybe, a pathway to redemption for himself. Stars Matthew Rhys, Juliet Rylance, Chris Chalk, Shea Whigham, Tatiana Maslany and John Lithgow. On DVD, Blu-ray, from Warner.

“Beast Mode” (2020), starring C Thomas Howell, Leslie Easterbrook, Ray Wise, James Hong and James Duval is an 80s throwback horror film that tells the story of a has-been Hollywood producer who, after accidentally killing his lead star, turns to an ancient herbal elixir in the hopes that it will save his career. He makes a dark deal that unleashes a band of bloodthirsty, shape-shifting, ferocious beasts on LA. From Devilworks Pictures … “Thirst” (2019 — Iceland), starring Hjörtur Sævar Steinason, Hulda Lind Kristinsdóttir 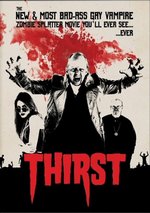 and Jens Jensson, is an Icelandic adrenaline-pumping vampire epic. The drug addict Hulda is arrested and accused of murdering her brother. After she’s released because of insufficient evidence, she meets Hjörtur, a thousand-year-old gay vampire, and together they fight a cult while being investigated by a rogue detective. From Uncork’d Entertainment … In “The Trip: Four Course Meal” (2020), actors Steve Coogan and Rob Brydon embark on multiple road trips through Europe including the UK, Italy, Spain, and Greece, sampling the restaurants, eateries, and sights along the way. As the brilliant comic duo, freestyling with flair, drive each other mad with constant competition and showdowns of competing impressions of famous celebrities, Coogan and Brydon create a brilliantly comic rumination on the nuances of friendship and the juggling of family and career. Four-disc set with “The Trip: Greece,” “The Trip: Italy,” “The Trip: Spain” and “The Trip: UK.” From IFC Films … In 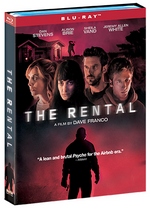 “The Rental” (2020), starring Alison Brie, Dan Stevens, Sheila Vand and Jeremy Allen White, two couples on an oceanside getaway grow suspicious that the host of their seemingly perfect rental house may be spying on them. Before long, what should have been a celebratory weekend trip turns into something far more sinister, as well-kept secrets are exposed and the four old friends come to see each other in a whole new light. On DVD, Blu-ray, from IFC Midnight/Scream Factory … In “Intersection” (2020 — Australia), starring Matt Doran, Lianne Mackessy and Lucy Fry, when white-collar extortionist (Doran) discovers his son is kidnapped, he is forced to drive the city streets, completing an escalating series of tasks to appease his child’s abductor. Writer-Director Samuel Bartlett sets out to create a tightly-woven kidnapping thriller, and has flipped the genre on its head by making the kidnapper the good-guy, and the victim the villain. From Breaking Glass Pictures … 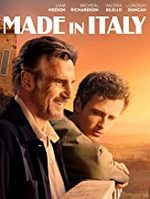 “Made in Italy” (2020), starring Liam Neeson, Michael Richardson, Valeria Bilello, Lindsay Duncan, is a heart-warming father-son story set in glorious Tuscany about bohemian London artist Robert (Neeson), who returns to Italy with his estranged son Jack (Richardson) to make a quick sale of the house they inherited from his late wife. Neither expects to find the once beautiful villa in such a state of disrepair. Renovations go badly, with father and son soon finding themselves at odds. Robert’s comical lack of DIY experience leads him to seek help from some colorful locals including the no nonsense Kate (Duncan), an ex-pat making her living selling villas who quickly captures his attention. On DVD, Blu-ray, from Universal … RKO’s resident “bad boy” Robert Mitchum surprised audiences with his softer side in the classic Yule-themed romantic comedy “Holiday Affair” (1949). Mitchum portrays Steve Mason, a department-store clerk who loses his job, yet buys an electric train set for a child he scarcely knows. It must be Christmastime. Mitchum and Janet Leigh are warmly matched in a seasonal favorite scripted by Isobel Lennart (later to adapt Mitchum’s “The Sundowners”) and directed by Hope/Crosby “road movies” veteran Don Hartman. In a Blu-ray debut from Warner Archive.

Set against the rustic winter backdrop of the Colorado Western Slope, “Evergreen”
(2019), starring Tanner Kalina, Amanda Maddox, Olivia Grace Applegate and David Bianchi, is an intimate character study of an interfaith couple’s relationship over a tumultuous Christmas weekend. Paul, a contemporary Catholic, plans to propose to his girlfriend, while pragmatic Gena wants to finally take their celibate relationship to the next level. When expectations clash, the two set aside their prior notions and agree to a brutally honest, no-holds-barred weekend of “question and answer,” unearthing long-buried secrets and manifestations from relationships past. From Indican Pictures.

In “Werewolf” (2019 — Poland), starring Kamil Polnisiak, Nicolas Przygoda and Sonia Mietielica, children liberated from a Nazi concentration camp have to overcome hunger, thirst and vicious dogs in an abandoned mansion surrounded by the forest. On DVD, Blu-ray, from Indiecan Pictures … 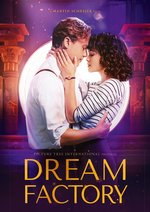 “Dream Factory” (2019 — Germany), starring Svenja Jung, Emilia Schüle, Dennis Mojen and Nikolai Kinski, is set in the summer of 1961 in Germany. Emil (Mojen) arrives at DEFA Studio Babelsberg to begin working as an extra when he falls in love with a French dance-double, Milou (Schüle). Though it‘s love at first sight, they are torn apart when East Germany closes its border and erects the Berlin Wall just days after they first meet. Milou returns to Paris. Emil remains in East Germany, crushed by the fact that the love of his life just slipped through his hands … that is, until he sets in motion a daring and adorably romantic plan. From MPI … In “The Rising Hawk: Battle for the Carpathians” (2020 — Ukraine/USA), starring Robert Patrick, Tommy Flanagan, Poppy Drayton, Alex MacNicoll and Tserenbold Tsegmid, during the 13th Century, Zakhar Berkut (Patrick) and his wife Rada (Doody) lead a group of highlanders in the Carpathian Mountains. Unfortunately, their tranquil existence is soon threatened by Burunda Khan (Tserenbold), a powerful Mongolian general who leads his massive armies west in search of new lands to conquer. On DVD, Blu-ray, from Shout! Factory.

“Green Eggs and Ham: The Complete First Season” (2019) is a single disc with 13 animated episodes of the Dr. Seuss series featuring an all-star cast including Michael Douglas, Adam Devine, Keegan-Michael Key, Eddie Izzard, Jillian Bell, Ilana Glazer and Diane Keaton. A chance meeting at a diner and a briefcase switch-up results in two unlikely companions Sam (Devine) and Guy (Douglas) getting mixed up on an adventure that takes them on a road trip to save an endangered animal – the elusive Chickeraffe – from a far-off zoo. The two mismatched souls cross paths with the overprotective Michellee (Keaton), whose daughter, EB (Glazer) desperately wants a pet and 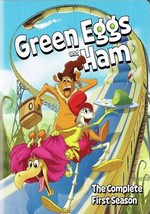 falls in love with the Chickeraffe … despite her mother’s fears that it will eat off her face (it won’t). As Michellee’s walled-up heart connects with the heart-hardened Guy, a laborious love story begins. With the foursome also unknowingly pursued by a bounty-hunter Goat, two bad guys, McWinkle and Gluntz and Snerz, a tiny, evil overlord who’s out to get the Chickeraffe as his ultimate trophy, they set out on a cross-country road trip, learning to try new things along the way – like hope, friendship … and a certain delectable dish. From Warner … “Tex Avery Screwball Classics: Volume Two” is a single-disc with 21 cartoons. Welcome back for another three-ring circus of animated comedy from the legendary leader of cartoon fun – director Tex Avery. In the first ring, Avery serves up some of his finest one-shot creations: cartoons featuring cats who hate people, wacky cuckoo clocks, kooky cavemen and lovelorn French fleas. We also meet up again with Avery’s attractive Red Riding Hood, a pair of amorous wolves and his durable all-around fall guy, Spike. The second ring is a showcase for Avery’s ironically deadpan “Happy Hound”: Droopy. The third ring offers a whimsical glimpse into the future – or at least a future from the POV of the mid-20th century – with a plethora of zany postwar inventions. While none of the cartoons “of tomorrow” foresaw smartphones or Blu-ray players, these far-fetched contraptions, gadgets, houses and farms, televisions, and various modes of transportation could only come from the madcap mind of Avery and his MGM crew. Uncut, restored and remastered in high definition for the first time. From Warner Archive.