The House Next Door: Meet the Blacks 2 (2021) Helen is forced by her daughter to move into the Pine Grove Retirement Community after she locks herself out of her house while a fire rages in the kitchen. At first, Helen is reluctant to stay there, but eventually is invited into the social circle of the Queen Bees: a group of women (and a few men) who rule the social scene like the popular kids in high school. Eventually, Helen comes into her own as she builds new friendships and even finds romance with a fellow resident named Dan. Vitals: Director: Michael Lembeck. Stars: Ellen Burstyn, Jane Curtin, Loretta Devine, Ann-Margret, Christopher Lloyd, James Caan, Alec Mapa, French Stewart, Matthew Barnes. 2021, CC, MPAA rating: PG-13, 100 min., Comedy, US box office gross: $1.895 million, worldwide $1.895 million, Gravitas Ventures. Formats: DVD, VOD, Digital.

If you could choose only one memory to hold on to for eternity, what would it be? That’s the question at the heart of Hirokazu Kore-eda’s revelatory international breakthrough “After Life” (1998 — Japan), a bittersweet fantasia in which the recently deceased find themselves in a limbo realm where they must select a single cherished moment from their life to be recreated on film for them to take into the next world. “After Life’s” high-concept premise is grounded in Kore-eda’s documentary-like approach to the material, which he shaped through interviews with hundreds of Japanese citizens. What emerges is a panoramic vision of the human experience — its ephemeral joys and lingering regrets — and a quietly profound meditation on memory, our interconnectedness, and the amberlike power of cinema to freeze time. On DVD, Blu-ray, with new 2K restoration, approved by writer-director Hirokazu Kore-eda, with uncompressed monaural soundtrack on the Blu-ray. From The Criterion Collection.

In “Are You Afraid of the Dark?: Curse of the Shadows” (2021), the Midnight Society returns in a follow-up to 2019’s reimagined limited series horror anthology. Based on the ‘90s kids’ cult classic and featuring a terrifying new story, the second season includes six hour-long episodes that follow an all-new group of kids as they tell the tale of a curse that has been cast over their small seaside town, haunted by a villain named the Shadowman. After their leader goes missing, it’s up to the remaining members of the Midnight Society to break the curse and free the Shadowman’s victims, before they too disappear into the shadows. From Nickelodeon/Paramount.

In “My Heart Can’t Beat Unless You Tell It To” (2021), starring Patrick Fugit, Owen Campbell and Ingrid Sophie Schram, Dwight (Fugit) prowls the streets after dark. He searches each night for the lonely and forlorn, looking for people who won’t be missed. Dwight takes no joy in this, but he needs their blood. Without fresh human blood, his fragile young brother Thomas cannot survive. Each death takes a larger toll, the burden of his crimes weighing heavier each time, threatening to crack his spirit. But Thomas (Campbell) and his sister Jessie (Schram) are all the family Dwight has left, and as a fiercely private and close-knit family unit, they depend on him and the rituals they’ve learned in order to keep their secret. On DVD, Blu-ray, from Dark Sky Films). Read more here … In “The Frenchman’s Garden” (1978 — Spain), starring María José Cantudo, Ágata Lys and Paul Naschy, “The Frenchman” was what locals called the man who ran the bar and restaurant in the small town of Peñaflor in rural Spain in the early part of the 20th century. But Juan Andrés Aldije Monmejá was not your usual jolly inn keeper. He ran an illegal gambling den and pimped out the waitresses who worked for him; even though he was married to one of the richest women in town, Juan Andrés was not averse to visiting his own bordello for late night entertainment. Deciding that there were easier and quicker ways to exploit his customers, The Frenchman started slaughtering them, stealing their money and burying their corpses in the garden at the back of his inn. As his greed increased, so did the savagery of his murderous acts, and it was not long before people started asking questions. On Blu-ray from Mondo Macabro … In “I Am Toxic” (2018 — Argentina), starring Esteban Prol, Finni Bocchino and Horacio Fontova, a man wakes in a world ravaged by biological warfare with no memory of his previous life. Taken prisoner by scavengers he meets a young woman who helps him escape. As the scavengers pursue them through barren wastelands he discovers that he must make the ultimate sacrifice to save her. From Jinga Films … What if demons, the living dead, evil dolls, and other supernatural creatures came to haunt our apartments, houses, cafes, museums and other places of daily life? How would you get through it? What would you do to stay alive? “Dark Stories” (2019 — France) brings together five tales of gripping terror: A lone mother is attacked by a bloodthirsty creepy doll … and to keep it from killing her sleeping son, she must use all her imagination to distract it with horror stories — featuring shadowy ghouls stalking an art gallery, the final judgment before an impending apocalypse, a forensic scientist confronted by his zombie victim, a nightmarish monster and more. From Scream Factory. Read more here … “Occupation: Rainfall” (2021 — Australia) is a sequel to the 2018 film “Occupation.” This installment unfolds two years into an intergalactic invasion of Earth, as survivors fight back in a desperate ground war. While casualties mount by the day, the resistance — along with some unexpected allies — uncovers a plot that could bring the war to a decisive end. Now, with the alien invaders hell-bent on making our planet their new home, the race is on to save mankind. On DVD, Blu-ray + Digital Code, from Lionsgate. Read more here … “The Misfits” (2021), starring Pierce Brosnan, Rami Jaber, Hermione Corfield, Jamie Chung, Mike Angelo, Tim Roth and Nick Cannon, are a band of modern-day Robin Hoods that recruit renowned thief Richard Pace (Brosnan) to help them pull off the heist of the century. The prize: millions in gold bars stashed underneath one of the world’s most secure prisons. From Action director Renny Harlin (“Cliffhanger,” “Die Hard 2,” “The Long Kiss Goodnight”). From Paramount. Read more here … Get ready for the only Friday the 13th of the year on August 13 with this “Friday the 13th 8-Movie Collection,” which includes newly remastered Blu-ray versions of the first four films in one of the most In “Drunk Bus” (2020), starring Charlie Tahan, Kara Hayward, Pineapple Tangaroa and Sarah Mezzanotte, Michael (Tahan) is a recent graduate whose post-college plan is derailed when his girlfriend leaves him for a job in New York City. When the bus service hires a security guard to watch over the night shift, 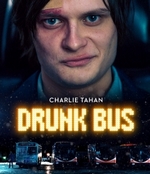 Michael comes face to tattooed face with Pineapple, a 300-pound punk rock Samoan. On DVD, Blu-ray, from Filmrise/MVD Entertainment … In a locked-down NYC, two priests open their church doors to those seeking salvation during the most isolating of times in “Scenes From an Empty Church” (2021), starring Kevin Corrigan, Max Casella, Thomas Jay Ryan and Paul Reiser. From the commonplace to the truly metaphysical, their visitors reflect the full spectrum of personal crises of spirituality. Throughout their encounters with the city’s sweetest, wildest and weirdest, the two priests learn the importance of connection, empathy and open-mindedness. Sometimes a little faith is all you need to make it through the bad times. From MPI Media Group. Read more here.

In “Lust” (2017 — Portugal), starring Magdalena From Delis, Sondre Krogtoft Larsen and Damian Gallagher, a famous crime writer becomes a victim after a crazed fan brutally attacks her. Isolated in her apartment she tries to recover but continues to feel threatened after experiencing strange events. Her psychiatrist believes that it’s all in her mind, a result of post-traumatic stress, but she is convinced that her attacker is stalking her and resorts to extreme violence to protect herself. From Jinga Films … The Copenhagen streets lead to the doorway of hell in Jesper Isaksen’s stylish horror thriller “Victim of Love” (2019 — Denmark). Charly (Rudi Køhnke) has unwillingly returned to his hometown Copenhagen in order to search for his American girlfriend Amy, who disappeared under strange circumstances at a hotel. Charly decides to revisit the hotel but is soon distracted by possible criminal activities in the room next door, by the tempting bartender Felicia (Siff Andersson) and his own faltering sense of judgment. Good old Copenhagen is decaying into a phantasmagorical nightmare, causing us to doubt what we’re watching. From Indican Pictures. Read more here … Moving to the countryside of 20th century Rio de Janeiro, prim and assuming Laura is unprepared for life on an isolated plantation in “Through the Shadow” (2015 — Portugal), starring Romeu Evaristo, Alexandre Varella, Isabel Gueron, Xande Valois and Mel Maia. Hired as a nanny for two young orphans who live on their uncle’s coffee farm, she soon notices that things are not all as they seem. Confronted with continual apparitions, and noting the children’s increasingly ambiguous behavior, Laura becomes convinced in the presence of hostile spirits whom she believes are intent on taking possession of her young charges. With growing concerns for their safety, she strives to unravel the mysteries of her new home without realizing that it may be herself who is in mortal danger. Based on Henry James classic novel “The Turn Of The Screw.” From Jinga Films.

“Chariots of the Gods: 50th Anniversary” (1970): A new 2K restoration from the original 35mm negative. Based on Erich Von Daniken’s book purporting to prove that throughout history aliens have visited earth. The Academy of Motion Picture Arts and Sciences has included “Chariots of the Gods” in their list of the Top 100 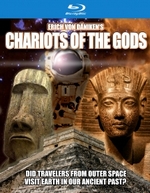 Documentary Films of All Time. “Fifty million stars in our galaxy have the potential of supporting life forms capable of traveling to other planets,” says world-renowned authority Erich von Daniken, whose film version gives stunning visual proof that some form of life from outer space landed on Earth centuries ago. It took five years for von Daniken to document, on film, the physical evidence of visits by galactic travelers who came to Earth. Just what they did here and the influences they left behind is the core of the film. In search of basic truths, the film takes viewers into the far reaches of underground caves and tombs, and to the tops of desolate mountains on every major continent to show the evidence von Daniken has been collecting. Although this controversial film may provide the answers to age old mysteries, it may be the beginning of an entirely new set of questions. On DVD, Blu-ray, from VCI Entertainment/MVD Entertainment.