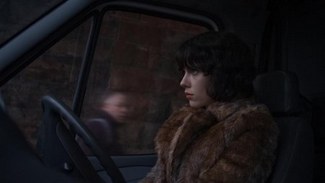 “Under the Skin” is kind of a 21st century version of “The Man Who Fell to Earth” in which an extraterrestrial finds itself out of sync with the humans around it, but here with a different goal than Nicolas Roeg’s Thomas Jerome Newton (David Bowie): An alien takes over the body of a voluptuous woman (Scarlett Johansson) and travels the highways and backroads of Scotland to lure unsuspecting men into an otherworldly lair where their flesh is harvested for unknown reasons. The film slowly and quietly follows the alien on her hunts until she grows too comfortable in her borrowed skin and begins to understand what it means to be human. A tour-de-force for Johansson and director Jonathan Glazer, who have built a minimalist existential gem. Extras: “Making of Under the Skin” featurette. Vitals: Director: Jonathan Glazer. Stars: Scarlett Johansson, Paul Brannigan, Jessica Mance, Joe Szula, Krystof Hadek, Jeremy McWilliams. 2014, CC, MPAA rating: R, 107 min., Science Fiction, Box office gross: $1.531 million, Lionsgate.