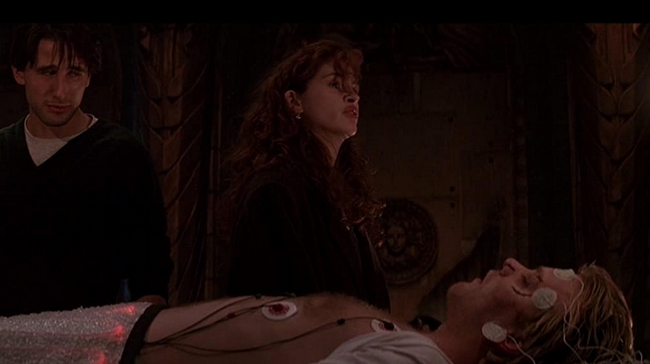 Known for his impressively eclectic filmography and for helping to launch the careers of several young Hollywood stars of the 80s and 90s, Joel Schumacher (“The Lost Boys,” “St. Elmo’s Fire”) tackles the existential question that, at one time or another, haunts us all: what awaits us after we die? In “Flatliners” (1990) At the University Hospital School of Medicine, 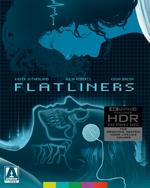 five ambitious students subject themselves to a daring experiment: to temporarily induce their own deaths, hoping to glimpse the afterlife before being brought back to life. But as competition within the group intensifies and their visions of the world beyond increasingly bleed into their waking lives, they’re about to learn that the greatest threat comes not from the spirit world but from the long-suppressed secrets of their own pasts. Stylishly photographed by Jan de Bont (“Basic Instinct”) and featuring a cast of Hollywood’s hottest talent – including Kiefer Sutherland , Julia Roberts, Kevin Bacon, William Baldwin and Oliver Platt — “Flatliners” is the ultimate life-and-death thrill ride. Brand new 4K restoration from the original negative, approved by director of photography Jan de Bont. Lossless DTS-HD Master Audio 5.1 and 2.0 surround soundtracks. On Blu-ray, 4K Ultra HD, from Arrow Video/MVD Entertainment. Read more here.

In “White Elephant” (2022), starring Michael Rooker, Bruce Willis, Olga Kurylenko, Vadhir Derbez and John Malkovich. when an assassination attempt is witnessed by two cops, an ex-marine turned mob enforcer, Gabriel Tancredi (Rooker), is ordered by his ruthless mob boss (Willis) to eliminate any and all threats. With an eager underling out to prove himself, rival gangs making moves and a rising body count, every step Tancredi makes threatens lives … including his own. On DVD, Blu-ray, from RLJE Films … A nightmarish evening unfolds when neighbors David (Luke Kleintank) and Robert (Jonathan Rhys Meyers) hit a woman on her bike and flee in “The Good Neighbor”(2022), co-starring Bruce Davison, Eloise Smyth and Ieva Florence. When her sister arrives seeking answers, Robert will do unspeakable things to protect their secret. From Screen Media Films.

“Shalom Taiwan” (2020 — Argentina), starring Fabián Rosenthal, Mercedes Funes, Santiago Korovsky and Brad Krupsaw, is a heartwarming, joyous, and uplifting dramady that follows the misadventures of a Rabbi who travels the world in search of donations to save his synagogue. From Outsider Pictures. Read more here … In “Apples” (2020 — Greece), starring Sofia Georgovasili and Aris Servetalis, amidst a worldwide pandemic that causes sudden amnesia, middle-aged Aris (Servetalis) finds himself enrolled in a recovery program designed to help unclaimed patients build new identities. Prescribed daily tasks on cassette tapes so he can create new memories and document them on camera, Aris slides back into ordinary life, meeting Anna (Georgovasili), a woman who is also in recovery. Through images deadpan, strange and surreal, Greek writer-director Christos Nikou posits a beguiling reflection on memory, identity, and loss, exploring how a society might handle an irreversible epidemic through one man’s story of self-discovery. On DVD, Blu-ray, from Cohen Media Group.

“Waiting – The Van Duren Story” (2018) is the award-winning documentary on the lost Memphis power pop artist, Van Duren. From the ashes of Big Star in Memphis, Duren played in bands with Jody Stephens and Chris Bell, before being led to New Haven by manager Andrew Loog Oldham of the Rolling Stones. Forty years later, two Australians discover his music and, on a drunken promise, embark on an amazing journey to make a film about the artist touted as “the next Paul McCartney.” There’s only one catch – the two have never made a movie before, so it’s learn as they go. Their quest leads them to con men, rock stars and Scientologists, as they uncover the dark secrets that kept Duren’s second album from ever being released. Despite one setback after another, they soldier on, until they realize he doesn’t own the rights to his music. Without the music, how will they complete the film? After meeting Van Duren at Ardent Studios in Memphis, they find that they are now part of the story, and must help Duren get his music rights back. From MVD Visual. Due August 5.