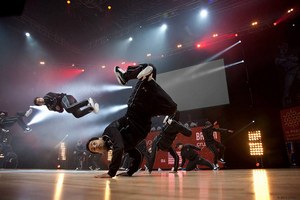 Dance film follows a legendary break-dancing crew’s return to its roots in order to reclaim the world championship after more than a decade of defeat. The Battle of the Year competition is an all out war of mind-blowing dance moves, explosive routines and electrifying displays of skill and imagination. The American team, a group of underdogs, is pitted against the world’s elite in a film that is low on plot and dialogue and has the silly conceit of a basketball coach training the dance crew. Extras: “This Is Planet B Boy” featurette explores B-Boy history and culture, “Preparing for Battle: Training & Rehearsals” behind-the-scenes featurette. Blu-ray adds Extended dance sequences from three scenes in the film; “The Art of B-Boying: A Guide to Breaking” featurette. Vitals: Director: Benson Lee. Stars: Josh Holloway, Laz Alonso, Caity Lotz, Josh Peck, Chris Brown. 2013, CC, MPAA rating: PG-13, 110 min., Music, Box office gross: $8.792 million, Sony.