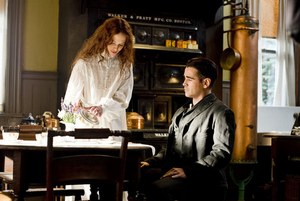 You’d be hard-pressed to find a better example of a big-screen fiasco than this overwrought, over-serious, romantic fantasy written and directed by Akiva Goldsman (“A Beautiful Mind”) but based upon the acclaimed 1983 novel by Mark Helprin. The film is ripe with metaphysical nonsense from beginning to end, opening and closing with silly voiceovers about miracles and humans finding their places amongst the stars. The first half of “Winter’s Tale” is set in New York City at the beginning of the 20th century, and pits Peter Lake (Colin Farrell), a master thief, against his ex-boss and mentor Pearly Soames (Russell Crowe), a gangster who’s really a demon and disciple of Lucifer (Will Smith in a very dumb cameo). Soames wants to kill Lake, but the young man is saved from death by his guardian angel, a flying white horse. When Lake fails to save the life of a young woman, he disappears for almost a century, popping up in modern New York (not a day older) again to be hunted down by the demon Soames in the last half of the film. There’s so many lapses in believability and so much over-the-top posturing by the actors that you’ll be laughing instead of crying (the film is supposed to be a tearjerker of sorts.Extras: “Winter’s Tale: A Timeless Love” featurette. Blu-ray adds “Characters of Good & Evil” featurette, additional scenes. Vitals: Director: Akiva Goldsman. Stars: Colin Farrell, Jessica Brown Findlay, Russell Crowe, Jennifer Connelly, William Hurt, Eva Marie Saint. 2014, CC, MPAA rating: PG-13, 118 min., Fantasy Drama, Box office gross: $12.591 million, Warner.