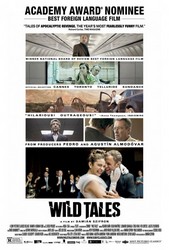 Anyone fed up with inequity, heartbreak, bureaucratic incompetence, road rage and corruption will love this fabulous anthology from Argentine director Damian Szifron. There’s six short stories involving distressed people. Inequality, injustice and the demands of the world we live in cause stress and depression for many people and some, however, explode. This is a movie about those people — full of rage, fury, deception and revenge — who cross the thin line that divides civilization and barbarism when faced with perceived injustice. The stories: An airline host strikes back at the people who have wronged him all his life; a young woman gets even with a local mafioso; a road rage incident in the middle of no-where escalates beyond control; a professional man finds a way to get even with injustice; a rich man wants to buy freedom for his son after a fatal hit-and-run accident; and a wedding party goes terribly awry when infidelity rears its ugly head. Deeply funny and black, these stories will thrill and chill you — and keep you in stitches (pun intended). Vitals: Director: Damian Szifron. Stars: Ricardo Darin, Oscar Martinez, Leonardo Sbaraglia, Erica Rivas, Rita Cortese, Julieta Zylberberg, Darío Grandinetti. 2015 — Argentina, CC, MPAA rating: R, 122 min., Comedy-Drama, Box office gross: $2.626 million, Sony. Extras: “Wild Shooting: Creating the Film” behind-the-scenes look at the creation of the Oscar-nominated film, “An Evening at the Toronto International Film Festival With Damian Szifron.”