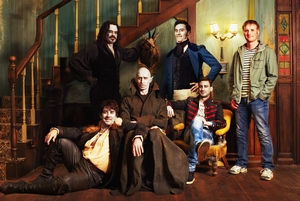 “What We Do in the Shadows” is definitely the sleeper hit of the year, crossing over from horror cultists to mainstream moviegoers. The wacky film — imagine, if you will, a cross between “Borak” and “The Adams Family,” only much, much better — is a New Zealand indie outing by Jemaine Clement and Taika Waititi, creators of the HBO hit series “Flight of the Conchords.” It’s at once a very, very funny send-up of vampire films as well as a self-referential satire of the whole horror cult genre. The film — a mockumentary (in which the camera crew wear garlic and crucifixes) follows an unhip quartet of vampire friends as they go about their nightly routines — paying bills, doing the dishes, hunting for fresh blood. Though they’re centuries old, none of them have kept up with the latest trends in technology or fashion, and the gags mount as the ageless vampires have difficulty maneuvering through 21st Century Wellington. And problems arise when they “turn” a young hipster, who has his own views on how a vampire should live. It’s all outrageous and hilarious.Vitals: Director: Jemaine Clement, Taika Waititi. Stars: Jemaine Clement, Taika Waititi, Jonathan Brugh, Cori Gonzalez-Macuer, Stu Rutherford, Ben Fransham. 2015, CC, MPAA rating: NR, 85 min., Horror Comedy, Box office gross: $2.176 million, The Orchard/Paramount. Blu-ray extras: Commentary by Jemaine Clement and Taika Waititi, “Behind the Shadows,” deleted scenes, video extras, interviews, promo videos, poster gallery.