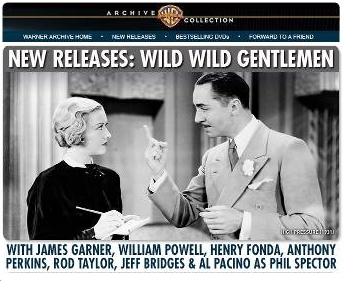 NICHOLS: THE COMPLETE SERIES (1971-72) This seldom seen, never-syndicated TV gem is a true one-season wonder courtesy of the legendary James Garner and scribe Frank R. Pierson (Cat Ballou). True to his ‘maverick’ self and the megawatt star power he gained via his breakout movie work, Garner returned to TV in 1971 on his own terms. Nichols bears his imprimatur in every way. It’s a sardonic critique of the cliched American Hero’s penchant for ugly, violent solutions to the complicated problems and an exploration of the moral grays of day-to-day life. Garner plays Nichols, an Army lifer who cashes out after he observes the advent of the machine gun at the dawn of 20th Century, going as far as swearing off gunplay. When he returns to his old town, its unofficial mayor, the hardscrabble and semi-larcenous “Ma” Ketcham (Neva Patterson), quickly drafts him and his motorcycle to become sheriff. Instead of his guns, Nichols tries to lead the town by his wits, charm and absolute aversion to violence in a town still clinging to the ways of the Wild West. Far, far ahead of its time, Nichols failed to find an audience and faded into obscurity – but not before Garner saw the show out with a final episode that is truly a stunner. Garner would revisit much of Nichols’ themes and ethos (along with co-star Stuart Margolin) in a more contemporary setting to great success with The Rockford Files. Co-starring Margot Kidder who’s engaging and enchanting as the lovely local barmaid who captures Nichols’ eye – and almost his heart. 6-Disc, 24-Episode complete collection

WILLIAM POWELL AT WARNER BROS. (1931-34) Between his matinee idol silent Paramount era and his grand gent days at MGM, William Powell enjoyed a 9-film interregnum on the gritty streets of the Warner Bros. lot. As the studio struggled with how to fit the suave thespian in amongst its assortment of rough-hewn character mooks and mugs, Powell himself struggled to find vehicles that would best show off his strengths. What emerged is a series of seldom-seen gems that display a truly titanic talent in its nascent stages, still astonishing and beguiling – all with an extra soupcon of pre-Code spice! Set contains:

Back in Print From the Paramount Ranch

THE TIN STAR (1957) Anthony Mann directs this Western classic that plays to the post-High Noon audience while still staying true to the tropes of the past. Henry Fonda stars as hard-bitten and bitter bounty hunter Morg Hickman, enlisted by greenhorn lawman Ben Owens (Anthony Perkins) to show him the ropes of roping in the lawless and the lynchers. Future outlaw icon Lee van Cleef appropriately appears as a cretin.

CHUKA (1967) Rod Taylor produced this muscular Gordon Douglas directed besieged fort flick that reflects the Vietnam era as much as the Frontier times. Taylor plays taciturn gunslinger Chuka, fast on the draw and slow to forgive, who finds himself sharing the siege with a crew of craven soldiers, their unhinged commander (John Mills) and an old flame (Luciana Paluzzi). Also stars Ernest Borgnine and James Whitmore.

BAD COMPANY (1973) Oft’ overlooked cinema titan Robert Benton co-wrote (with noted screenscribe David Newman) and directed this revisionist Western that casts a jaundiced but humane eye on the myth and realities of the Wild West. It’s a journey away from innocence as seen through the prism of two young men – one full of schemes (an already astonishing Jeff Bridges), the other full of dreams (Barry Brown). On the run from the Civil War draft, the salvation they seek in the West may very well be their damnation.

BEAUTICIAN AND THE BEAST (1997) Ken Kwapis directs Timothy Dalton and Fran Drescher in this goy vs. oy riff on The King and I. Eager to make her way in the world, hairdresser Joy Miller (Drescher) gets her chance when she’s sent to a modern once-upon-a-time land called Slovetzia to tutor the three children of gruff, widowed dictator Boris Pochenko (Timothy Dalton). Joy thinks she’s been hired as a beautician. Boris thinks she’s been hired as an able science teacher. The fate of a nation hangs in the balance! Also stars Ian McNeice.

MARY AND MARTHA (2013) Richard Curtis (Black Adder, Doctor Who, Four Weddings and a Funeral) pens this tale of tragedy and redemption starring Hilary Swank and Brenda Blethyn. Two very different women – an upscale American interior designer named Mary (Swank) and a middle-class Englishwoman named Martha (Blethyn) form an unlikely bond following the loss of their only children from malaria contracted in Africa. Battling their lingering grief and the strains on their marriages, the two work together to raise awareness of malaria, a preventable and treatable disease, while recovering their sense of purpose. Philip Noyce directs.

PHIL SPECTOR (2013) Al Pacino and Helen Mirren star in writer/director David Mamet’s fascinating exploration of the limits and boundaries to understanding embodied in the privileged attorney-client relationship.Pacino plays Spector to Mirren’s Linda Kenney Baden, who represented Spector during his first trial for murder. The film transforms news to myth, as Mamet draws inspiration from actual persons in a trial, but neither attempts to depict them nor comment upon the actual trial or its outcome. Also stars Rebecca Pidgeon, Jeffrey Tambor and Chiwetel Ejiofor.