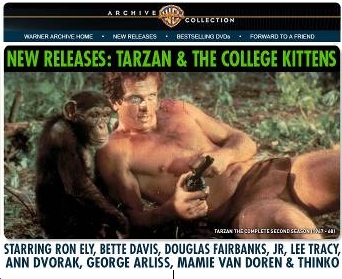 TARZAN THE COMPLETE SECOND SEASON (1967-68) Ron Ely finishes his legendary run as Edgar Rice Burroughs’ immortal creation Tarzan in the show’s 26 episode second season. NBC amped up the wattage with Tarzan, Cheetah, and Jai (Manuel Padilla) coming to the aid of some very famous faces. First off, Tarzan takes on a tiger in one of the series most acclaimed episodes guest starring James Whitmore. Then prepare for an eye-dazzler of star-power including George Kennedy, Helen Hayes and James MacArthur (playing mother and son!), James Earl Jones, Woody Strode, Clarence Williams III, Robert Loggia, Geoffrey Holder, Fernando Lamas, and Ted Cassidy. There’s a titanic two-parter, “The Four O’Clock Army,” that teams recurring guests Julie Harris and Maurice Evans in defense of a village under siege by slavers. Oh, and to seal the deal Ethel Merman drops by the jungleŠ as do Diana Ross and The Supremes! Newly remastered.SEX KITTENS GO TO COLLEGE (1960) Robots, chimps and sex kittens join forces with legendary B-smith Albert Zugsmith (Confessions of an Opium Eater) to create an epic screwball campus comedy that prefigures both grindhouse flicks and family-friendly college capers. When Collins College’s digital supercomputer, Thinko (played by real-life Westinghouse robot, Electro), picks Dr. Mathilda West (Mamie van Doren) to head their science department, nobody expects the polymath savant to pack more curves than a rack of test-tubes. While the faculty struggles to pick their slack-jaws off the floor, a crew of gangsters puts the muscle on them, thanks to Thinko’s knack for picking the ponies. Albert Zugsmith’s exploitation classic comes to you in its full, unexpurgated glory, featuring some very blue electric dreams from Thinko that were not part of the American release. Also stars Tuesday Weld, Mijanou Bardot (Brigitte’s sister) John Carradine, Martin Milner, Jackie Coogan, Conway Twitty, Woo Woo Grabowski, Abraham Q. Voltaire (the chimp) and Vampira. Newly remastered and uncut. 16×9 Widescreen.

PARACHUTE JUMPER (1932) Alfred R. Green (Baby Face) pairs Douglas Fairbanks, Jr. and Bette Davis for this high-flyer that mixes romance and rum-running during the lowdown depths of the Great Depression. Fairbanks and Frank McHugh play ex-Marine pilots who end up flying shady missions for a smuggler (Leo Carrillo) who may be slipping something extra in amongst the hooch. Davis plays “Alabama”, an out-of-work stenographerÂ  who shacks up with the boys – but don’t any funny ideas, pre-Code or not, Alabama’s on the up-and-up, got that? Newly remastered.

LOVE IS A RACKET (1932) Fast-talking Fedora-man Lee Tracy takes a bite out of the second banana role (and the amazing Ann Dvorak is third!) in support of Douglas Fairbanks, Jr. in this tale of bullets and Broadway. Fairbanks plays a Great White Way gossip columnist who knows what NOT to mention if he want to keep his skin. This applies double to the activities of gangster Ernie Shaw (the always treacherous Lyle Talbot) but what’s a guy to do when his best dame gets caught up kiting checks and Shaw’s the gent holding the marker? William Wellman deftly mixes crime and comedy for this pre-Code charmer that really sticks.

THE WORKING MAN (1933) Warner Bros.’ leading “prestige” performer, Mr. George Arliss is the topliner for this corporate comedy romance, re-teams with his co-star from the smash The Man Who Played God, Bette Davis. Arliss plays shoe manufacturing magnate John Reeves, who long ago lost his love to the arms of his main rival, Tom Hartland. Encountering the now orphaned Hartland children – and feeling pushed out at his own company – Reeves goes “undercover” inside the Hartland’s manor and launches an all-out assault against his own company, while Jenny Hartland (Ms. Davis) defects to Reeves’ Shoes and the arms of his nephew. A farce with heart, Arliss keeps this corker on the sweet and narrow without descending into treacle. Newly remastered.