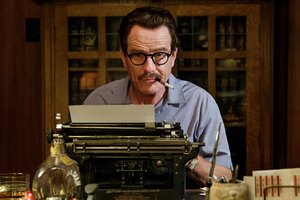 The Hollywood Blacklist — the persecution of Hollywood screenwriters, actors, directors, musicians, and other entertainment professionals for their political beliefs — destroyed careers and families for more than a decade, beginning in 1947 when the House Un-American Activities Committee began investigating “Communist infiltration” of Hollywood’s creative community. “Trumbo” is a stirring dramatization of the fight by Dalton Trumbo (Bryan Cranston) — one of the most successful screenwriters of the 1940s — against the U.S. government and the studio bosses who strangled his livelihood by blacklisting him — and nine others, collectively known as the “Hollywood 10” (though there were scores of others who were blacklisted, the “Hollywood 10” were the most visible at the time, being singled out for refusing to testify before Congress and refusing to “name names”). A tour-de-force performance by Cranston — and an over-the-top supporting performance by John Goodman as an exploitation-film producer who supports Trumbo during the Blacklist. Cranston has been nominated for an Oscar for Best Performance by an Actor in a Leading Role. Vitals: Director: Jay Roach. Stars: Bryan Cranston, Louis C.K., Elle Fanning, Helen Mirren, Diane Lane, Alan Tudyk, John Goodman, Adewale Akinnuoye-Agbaje, Dean O’Gorman, Michael Stuhlbarg. 2015, CC, MPAA rating: R, 124 min., Drama, Box office gross: $7.361 million, Universal. Extras: “Who is Trumbo?”, “Bryan Cranston Becomes Trumbo.”