The streaming business is not easy, and companies must allocate large sums of money to attract and retain users. As one of the pioneers of mass-market video streaming, Netflix took the world by storm in 2013 with House of Cards, and after that, the competition came to try to dominate the market as well.

When a streaming company finds itself in trouble, there are a number of things they can do to return to the top. One of these is to look at their exclusive shows and try to release a long-awaited new season of a favorite show. We found this was the case this year with Netflix and Stranger Things Season 4. According to ExpressVPN data, Stranger Things held the number-one spot for eight weeks, breaking all streaming records. Thus, in just one quarter, they gained even more users than they lost during the previous six months.

Today, we have a large selection of platforms where we can enjoy a vast number of series and movies, like Netflix, HBO Max, Amazon Prime, Hulu, Disney+, Apple TV+, etc., and the list is constantly growing. 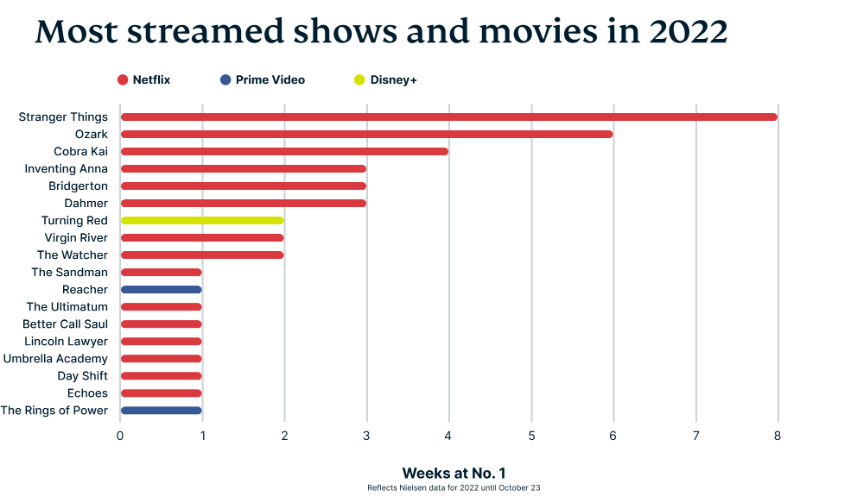 Let’s recall which shows and movies made 2022 a successful streaming year:

Created by the Duffer Brothers, this Netflix show’s plot takes place in the 1980s in the fictional town of Hawkings, Indiana. Mysteries and supernatural events that the protagonist Eleven and her ensemble face gained insane popularity among viewers. Add drama, romance, sci-fi, and creatures from another dimension, and you have one of the most streamed shows in history.

One more Netflix jewel – Ozark is a crime drama show created by Bill Dubuque and Mark Williams. The most straightforward way to summarize the plot of this series is – a married couple moves their family to the Lake of the Ozarks and becomes money launderers for drug cartels. The first season was released in 2017, and the fourth and final season in 2022.

3. House of the Dragon

The top-rated and highly anticipated series, House of the Dragon, was a hit for HBO Max. Dealing with the history of the Targaryan family, this fantasy show follows the events leading up to the ferocious civil war. It was a huge success that delighted viewers, especially GoT fans. It’s based on George R.R. Martin’s “Fire & Blood,” which was set 200 years before the events of Game of Thrones. Season 2 is expected in 2023.

An American computer-animated film was the most streamed movie for Disney+ in 2022. The plot follows the protagonist Meilin “Mei” Lee, a 13-year-old student in Toronto. The extraordinary thing about her is that, when experiencing any strong emotion, she transforms into a giant red panda due to a hereditary curse.

5.The Rings of Power

J. D. Payne and Patrick McKay developed this fantasy show for Amazon Prime Video. It is set in the Second Age, an era long before the timeframe of The Lord of the Rings. This fantasy drama plot centers around significant events of that age, and the most central story is the making of the Rings of Power in Eregion.

In conclusion, judging by the success the streaming giants had during 2022, next year could also bear fruit. Many shows and movies have been announced for 2023, which users eagerly await. Some of the most popular are: Queen Charlotte: A Bridgerton Story on Netflix, The Mandalorian Season 3, The Last of Us on HBO Max, and Gen V on Amazon Prime Video.