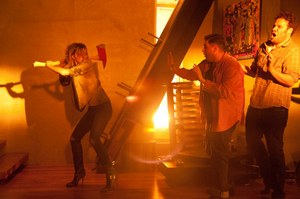 Every once in a while a comedy comes along that pushes the boundaries of what one expects in a movie. “Pink Flamingos,” “The Life of Brian,” “Monty Python and the Holy Grail,” “Borat” and “The Hangover” come to mind. Now add to the list “This Is the End,” an outrageous, raunchy comedy directed by Seth Rogen and Evan Goldberg and starring a bevy of Hollywood stars playing themselves as petty, selfish, lascivious Hollywood stars attending a party at James Franco’s house in the Hollywood Hills. In attendance are Jonah Hill, Seth Rogen, Jay Baruchel, Craig Robinson, Aziz Ansari, Paul Rudd, Mindy Kaling, Jason Segel, Michael Cera, Rihanna, Emma Watson, Martin Starr, Christopher Mintz-Plasse and many, many others — all having a wild time until a series of strange and catastrophic events — the apocalypse — devastate Los Angeles. Five of the partygoers, all friends — Franco, Hill, Rogen, Baruchel and Robinson — soon joined by Danny McBride — are trapped in the house and, as the world outside burns in the heat of damnation, dwindling supplies and cabin fever inside threaten to tear the friendships apart. There’s some very, very nasty, almost pornographic scenes and crazy special effects that, in conjunction with the actors poking fun at themselves and their lifestyles, makes for a very funny ride. I was shocked, titillated and fell off my chair with laugher. But beware — this is rated a very hard “R.” Extras: Commentary with directors Seth Rogen & Evan Goldberg; “Directing Your Friends” featurette; “This Is the Marketing”: Marketing outtakes, cast featurette, redband sizzle trailer, and four additional confessionals: “Aziz Haunts Craig Confessional,” “James & Danny Confessional.” “Jonah Confessional,” “Seth & Jay Confessional.” Blu-ray adds deleted scenes; “This Is the Gag Reel,” line-o-ramas blooper reel with back-to-back shots of the actors’ different delivery of certain lines from the film; six featurettes: “Meta-Apocalypse in which the cast discusses the unique acting challenges of playing versions of themselves, “Let’s Get Technical” visual effects & technical aspects of the film, “Party Time” behind-the-scenes look at the making of the party scene at James Franco’s house, “The Cannibal King” with Channing Tatum and Danny McBride, “The Making of ‘The Making of Pineapple Express 2′” behind-the-scenes look at the cast making the sequel to “Pineapple Express,” “Jay & Seth vs. The Apocalypse” original short that inspired the film. Vitals: Director: Seth Rogen and Evan Goldberg. Stars: Jonah Hill, Seth Rogen, James Franco, Jay Baruchel, Danny McBride, Craig Robinson, Aziz Ansari, Paul Rudd, Mindy Kaling, Jason Segel, Michael Cera, Rihanna, Emma Watson, Martin Starr, Christopher Mintz-Plasse. 2013, CC, MPAA rating: R, 107 min., Comedy, Box office gross: $96.505 million, Sony.