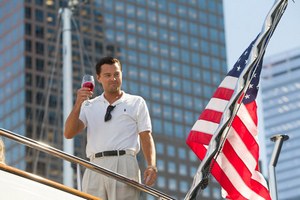 Martin Scorsese has created some of the greatest films ever to hit the big screen: “Mean Streets,” “Alice Doesn’t Live Here Anymore,” “Taxi Driver,” “Raging Bull,” “Goodfellas” and “Casino” are masterpieces. But his last couple of films — “The Aviator,” “The Departed,” “Shutter Island” and “Hugo” have left me cold. Now comes “The Wolf of Wall Street,” a big, rambling mess of a film based on the life of Jordan Belfort (played by Leonardo DiCaprio), a young Long Island, New York penny stockbroker hungry for a life of non-stop thrills who figures out how to parley his fast-talking style into millions of dollars by defrauding thousands of investors in a massive 1990s securities scam. Taking advantage of all that money could buy, Belfort entered an incredibly over-the-top world of sex, drugs and avarice that went on unabated until it came tumbling down on him after he was investigated by a multi-state fraud task force. Scorsese has created a three-hour opus glorifying Belfort and his boiler room henchmen with cartoonish, overblown and childish sex and drug sequences; his characters, particularly Belfort’s best friend in crime, Donnie Azoff (played by Jonah Hill), are mere caricatures sprouting filth and malice; the action moves from one bloated and debauched scene to the next. And poor DiCaprio is saddled with three of the longest and meaningless speeches in recent cinematic history. It’s all overacted and underbaked. Blu-ray extras: “The Wolf Pack” behind-the-scenes featurette. Vitals: Director: Martin Scorsese. Stars: Leonardo DiCaprio, Jonah Hill, Matthew McConaughey, Kyle Chandler, Rob Reiner, Jean Dujardin, Margot Robbie, Jon Favreau, Joanna Lumley, Cristin Milioti. 2013, CC, MPAA rating: R, 179 min., Drama, Box office gross: $112.821 million, Paramount.