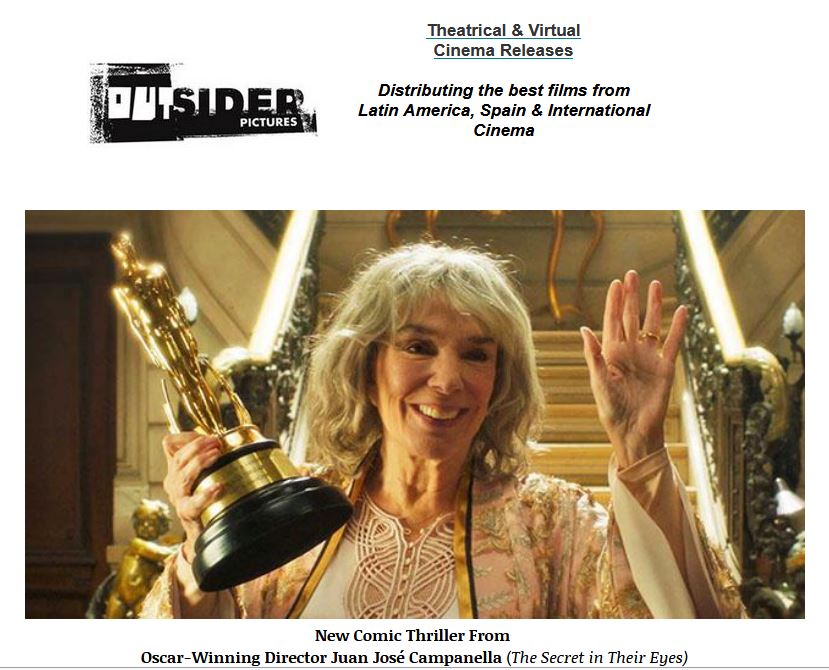 “Old-fashioned fare with an up-to-date edge…enjoyably over-the-top.” – The Hollywood Reporter
“A delicious metacinematic black comedy.” – El Mundo
“An homage to the golden age of Argentine cinema…with the irony, snappy retorts and
humor of  Campanella’s filmmaking.” – Clarin

From Juan José Campanella, the director of the Oscar Award-winning The Secret in Their

The story of a group of four long-time friends, including a beautiful actress from cinema’s golden age, an actor in the twilight of his life, a frustrated scriptwriter, and an old director, will do the impossible to try and preserve the world they have created in an old mansion in the countryside outside Buenos Aires. When faced with the threat of a young couple who could put everything in danger, financial gain, seduction, betrayal, and memories run amok to create the recipe for this delightful game of cat…and weasel.

Director Juan José Campanella (Law and Order: Special Victim Unit, House, 30 Rock, Colony) was Inspired by the Argentinian film Los Muchachos de Antes No Usaban Arsénico and classic English films made by Ealing Studios in the 1950s (The Ladykillers and Kind Hearts and Coronets). A Weasel’s Tale mixes layers of dark humor, an unusual style of dialogue and classic comedy, in an homage to classic cinema’s structure, conventions and craftsmanship. It counters between suspense, drama, comedy and romance, like a cross between Sunset Boulevard and The Best Exotic Marigold Hotel, all with a Latin twist.